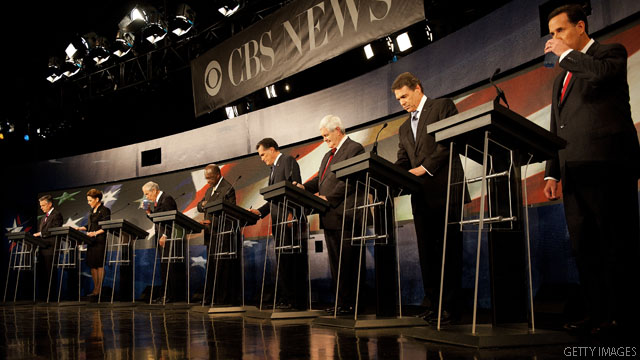 (CNN) – CNN's Truth Squad fact-checked some of the assertions made by Republicans candidates during Saturday night's GOP debate in Spartanburg, South Carolina that focused on foreign policy and national security.

Here are the results:

The statement: "A lot of programs we like but we simply can't afford. The first one we'll eliminate, however, we're happy to get rid of. That's Obamacare. And that'll save us $95 billion by my fourth year," Romney said.

The facts: Repeal of the Affordable Care Act, referred to by some critics as Obamacare, would indeed cut federal spending by about $95 billion in 2016, according to the Congressional Budget Office, the non-partisan research arm of Congress.

Rep. Michele Bachmann of Minnesota said the United States has nowhere to take terrorists for interrogation and said the CIA does not interrogate anymore.

The facts: The controversial CIA "black site" prison program, where the suspect of the USS Cole bombing and others were interrogated immediately after arrest, has been dismantled. In an April 2009 letter from CIA director Leon Panetta to employees, Panetta wrote, "CIA no longer operates detention facilities or black sites and has proposed a plan to decommission the remaining sites."

Former Pennsylvania Sen. Rick Santorum made numerous statements about sanctions on Iran and the Iran Freedom and Support Act during Saturday night's debate.

The Statement: "I've been working on Iran since back in 2004 and proposed exactly the things that Herman and Mitt Romney suggested, which was to give money to the rebel forces there to help the pro-democracy movement and put tough sanctions in place. I was opposed by President Bush, and yet we were able to overcome that and pass the Iran Freedom and Support Act. I was able to get that done, and then President Bush didn't provide money for the pro-democracy movement and President Obama cut that money."

The Facts: Santorum did sponsor a bill to provide assistance to pro-democracy groups opposed to the government of Iran. The bill was passed in 2006 and became public law.

During the debate, Rep. Michele Bachmann of Minnesota cited numbers relating to debt and deficit and implied that the Obama administration is to blame for their increases.

The statement: "In October, we just added another $203 billion in debt. When you consider the last time that Republicans controlled the budget, it was 2007 and debt was $160 billion per year. For every man, woman and child in the United States, it means each of us took $650 in debt for the month of October," Bachmann said.