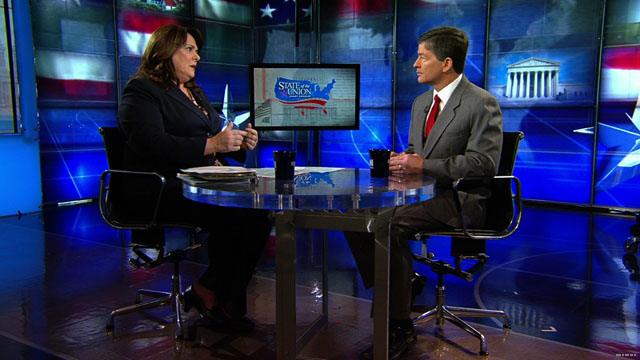 Texas Rep. Jeb Hensarling told CNN’s “State of the Union” that he remains hopeful for a comprehensive deal, but he made clear that an alternative could leave it to Congress to figure out how to implement results agreed upon by the 12-member panel made up of equal numbers of House and Senate Democrats and Republicans.

Explain it to me: The 'Super Committee'

“There could be a two-step process that would hopefully give us pro-growth tax reform,” Hensarling said.

The panel created under the debt ceiling deal earlier this year has until November 23 to reach an agreement on at least $1.2 trillion in deficit reduction over the next decade. If it works out an agreement, Congress must vote on the unamended plan by December 23. Failure to reach an agreement or gain approval by Congress and President Barack Obama would trigger significant automatic spending cuts scheduled to take effect in 2013.

Hensarling said Sunday that the process will fail unless Democrats are willing to accept significant reforms to entitlement programs such as Medicare and Medicaid, the government-run health care systems for the disabled, poor and elderly. Democrats, meanwhile, say any solution must be balanced with spending cuts, entitlement reforms and increased tax revenue.

“We believe that frankly increasing tax revenues could hurt the economy, but within the context of bipartisan negotiations with Democrats, clearly they are a reality,” Hensarling told CNN Chief Political Correspondent Candy Crowley

Republicans have offered a proposal with $1.4 trillion in deficit reduction, including $500 billion in new revenue from capping individual deductions while cutting all six income tax rates by roughly 20%. Under the proposal, the top rate would fall from 35% to 28%.

Democrats immediately rejected the plan as insufficient, saying it would end up decreasing revenue in the long run by permanently extending tax cuts from the Bush administration that are scheduled to expire at the end of 2012.

“There are no real spending cuts on the table,” Hensarling said. “All we are talking about here is slowing the rate of growth. All of these programs by and large are going to continue to grow but at a pace that would become more sustainable.”

The Republican proposal would bring in more revenue by spurring economic growth, he insisted, adding: “We Republicans want more revenues. We just want to raise it by growing the economy.”