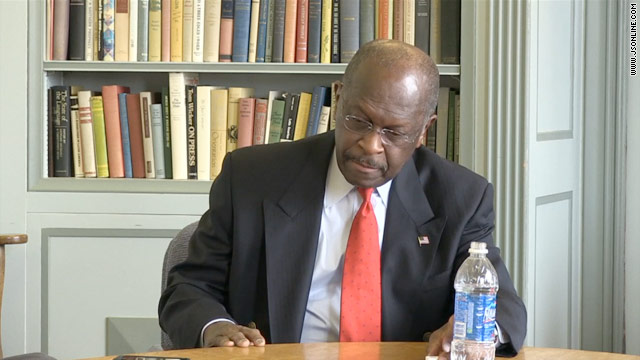 After an uncomfortable eight-second pause to collect his thoughts, the GOP contender explained that he would need to know more before he could unequivocally agree or disagree with President Barack Obama's actions in the conflicted country.

Cain was meeting with the editorial board of the Milwaukee-Wisconsin Journal Sentinel when Libya came up.

"Okay, Libya," he responded when asked whether he agreed with President Obama's actions in the region. Eight seconds later, after looking up, biting his lip and blinking repeatedly, Cain asked, "President Obama supported the uprising, correct?"

"I just want to make sure we're talking about the same thing before I say 'Yes, I agree' or 'No, I do not agree."

But just as Cain, a former conservative talk radio host, started to respond to the question, he then changed his mind.

"I do not agree with the way he handled it for the following reasons - um, no, that's a different one," he said, before uncrossing and crossing his legs, shifting position in his seat, and adjusting his jacket.

"Are you asking me did I agree or not agree with Obama?"

Cain finally settled on a response after hearing the question rephrased a second time.

"It's not a simple yes/no because there are different pieces and I would've gone about assessing the situation differently, which might have caused us to end up at the same place, but I think more could've been done was, what's the nature of the opposition?"

He explained that he would have gotten more information on determining who the opposition was, but said, "I'm sure that our intelligence people had some of that information." Although he declined to criticize the president, Cain said he didn't think enough was done.

"It's not a clear yes/no," he said again. "Because of all those things I think that should have been assessed… I don't know that they were or were not assessed."

"I didn't see reports of that assessment."

Campaign spokesman J.D. Gordon described the video of Cain's awkward moment as "out of context in some measure."

"He just had to think about it," Gordon said, because the candidate "had been getting a lot of briefings on the subtleties of the Arab Spring."

Gordon pointed out that Cain had been fielding questions from several editorial board members for 45 minutes and "skipping around from every topic from A to Z."

Cain's popularity fell 11 points in a CNN/ORC International Poll released Monday, falling to third place behind former Massachusetts Gov. Mitt Romney and former House Speaker Newt Gingrich. Cain's candidacy has been plagued by allegations of sexual harassment in recent weeks, which he has said are not true.

And he had a simple explanation for his apparent stumble at an event in Wisconsin late Monday: “I mean, they asked me a question about Libya, and I paused…so I could gather my thoughts," he said. "You know, it’s really complimentary when people start documenting my pauses. You know it’s one thing to document every word. It was a pause. That’s all it was. Good grief.”