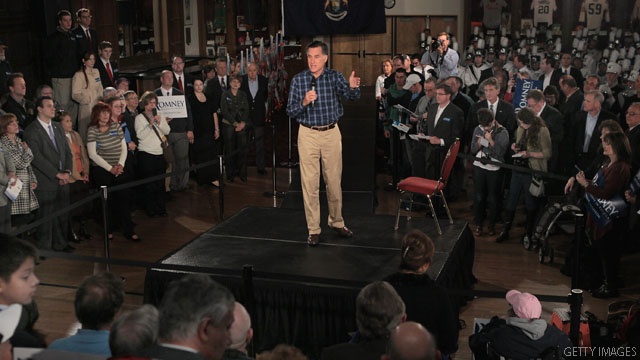 Washington (CNN) - Borrowing the title from a popular new wave song from the 1980s, Mitt Romney's presidential campaign is out Monday with an email that highlights the numerous recent attacks on the Republican presidential candidate by national Democrats.

In an email with the heading "You're My Obsession," the Romney campaign states that "President Obama's political machine has developed an obsession with attacking Governor Romney."

The former Massachusetts governor, who's making his second bid for the White House, has been at or near the top of most national polls this year in the race for the GOP presidential nomination, and he's also currently at or near the top in surveys in crucial early voting states.

For months, Romney's been the target of Web videos and emails from the Obama re-election campaign, the Democratic National Committee, and Priorities USA, an independent group that is supporting the president's re-election bid. But the efforts seem to have stepped up in recent weeks.

Many of the emails and Web videos highlight what the Democrats call Romney's "flip-flop" on numerous issues.

"With each passing day, it is becoming increasingly clear that President Obama and his Democrat allies are fixated more on Mitt Romney than on turning around our struggling economy. If the past is any guide, we expect this obsession will grow," says Romney presidential campaign spokeswoman Andrea Saul, in the email.

The Obama re-election campaign was quick to respond.

"Mitt Romney is attempting to declare his record off limits – he wants no discussion of his time as a finance executive focused on investors' profits with no regard to the impact for middle class families, his tenure as Governor when MA ranked 47th in job creation, and he certainly doesn't want a light to be shined on the litany of positions on key issues he has now changed on everything from climate change to troop withdrawal from Afghanistan," says campaign press secretary Ben LaBolt. "The Governor can rest assured that's not going to happen – the stakes are simply too high for middle class families."