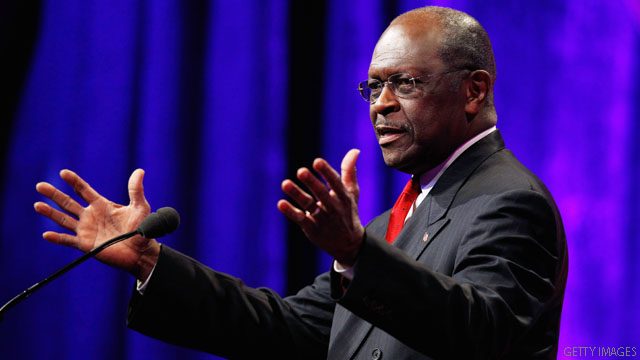 Allred is representing Bialek, who accused Cain of inappropriate behavior when he was CEO and president of the National Restaurant Association in the 1990s.

Bialek was the first accuser to reveal her identity when she held a news conference last Monday and gave details of what she described as Cain touching her inappropriately when she sought his help in finding a job after she was laid off from her job with the association's education foundation.

After she came to Washington to meet with Cain, Bialek said they went out to dinner and the groping incident took place in a car ride afterward.

"He also grabbed my head and brought it towards his crotch," Bialek told reporters last Monday. "I was very, very surprised and very shocked. I said, what are you doing? You know I have a boyfriend. This isn't what I came here for. Mr. Cain said, 'You want a job, right?' I asked him to stop, and he did."

In a press release Monday, Allred said the former boyfriend, who is now a pediatrician, "met Mr. Cain with Bialek and she told him that Cain had engaged in inappropriate touching of her shortly after the alleged incident took place."

During last week's news conference, Allred showed affidavits from two corroborating witnesses, including a former boyfriend, who had been told of the alleged incident at the time but who were withholding their identities.

Bialek's former boyfriend is scheduled to hold a news conference at 2 p.m. Monday in Shreveport, Louisiana.

After Bialek made her accusations, Cain rebutted them in his own news conference.

"I have never acted inappropriately with anyone, period," Cain said. He said he watched Bialek's news conference and "my first response in my mind and reaction was, I don't even know who this woman is. Secondly, I didn't recognize the name at all."

A second accuser, Karen Kraushaar, last week also talked publicly about her accusations after some media reported her identity.

Kraushaar and her attorney were trying to arrange a news conference with the four women who have made allegations against Cain, but they failed to reach the two accusers who have remained anonymous and as of now no event is planned.

While Cain's unfavorability rating among Republicans has risen in recent polls, he is still at or near the top of national surveys when asked who they would like to see as the GOP presidential nominee. His base of conservative supporters seemingly has not been deterred by the controversy as Cain has lashed out at the media for its coverage of the story. His campaign says it has raised $2.5 million since the story broke - almost as much as he brought in during the third quarter of fundraising going from July 1 to September 30.

"The American people deserve better than someone being tried in the court of public opinion based on unfounded accusations," Cain said during Wednesday's CNBC debate. "I value my character and my integrity more than anything else. And for every one person that comes forward with a false accusation, there are probably, there are thousands who would say none of that sort of activity ever came from Herman Cain."