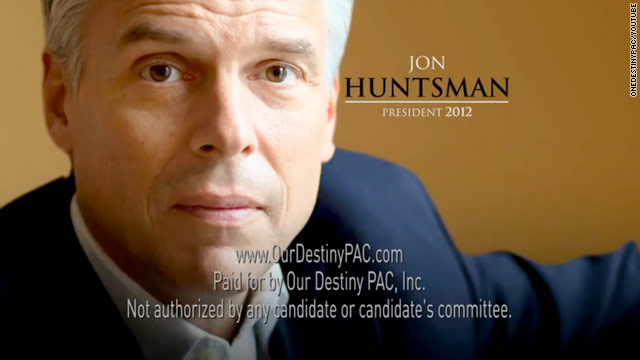 (CNN) - Supporters of Jon Huntsman are hitting television airwaves in New Hampshire Tuesday, asking a question they hope many voters will utter as they watch the spot: "Why haven't we heard of this guy?"

The one-minute ad, called "Someone," is financed by Our Destiny PAC, a group created to help elect Huntsman president. A spokesman for the group described the buy as "substantial."

The spot, which will run on cable and broadcast stations, features a group of people bemoaning the choices for the GOP presidential nominee.

"Our government is flabby, bloated, and weak," an older man says. "The world is literally collapsing and no one has shown up we can trust as a conservative."

Another man says he wants a consistent candidate, as opposed to "some phony who tells me one thing and you another."

The ad concludes with a man asking, "Why haven't we heard of this guy," an acknowledgement of Huntsman's struggle to gain traction in the Granite State.

Huntsman has said that as voters begin to really think about their choices for a candidate, they will begin notice him.

"I do believe that the electorate this go-around will be looking for clearly defined presidential leadership and I'm not sure we're seeing that," Huntsman said on CNN's "The Situation Room" in October.