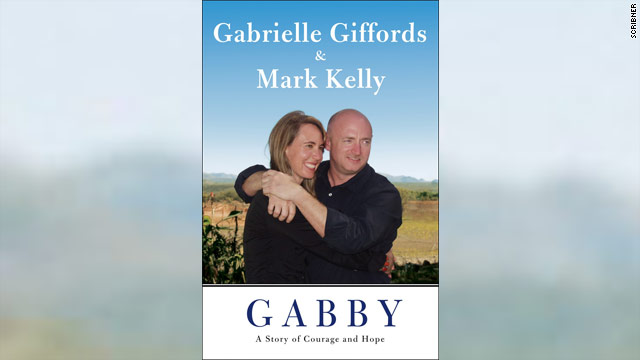 In book Gabby Giffords' husband recounts recovery and path ahead

Washington (CNN) - Rep. Gabrielle Giffords' husband, former astronaut Mark Kelly, recounts in their new memoir the ups and downs of her remarkable recovery from what could have debilitating head wound in less than a year.

He recounts the first time he saw her after the shooting on that Saturday in January, calling it "a great shock. Even when you know what to expect, nothing fully prepares you for seeing someone you love in such a critical state." She was near death when she had arrived at the hospital - comatose, hooked up to a breathing tube and her face was black and blue.

During a constituent event that day in a supermarket parking lot, she suffered a major brain injury while six bystanders were killed and more than a dozen others were injured.

Kelly writes about how in the early months of her recovery at a Houston hospital he asked her, "Do you ever have dreams when you're sleeping?" She replied, "No." He followed up saying, "You never dream about anything? Your childhood, your life in Congress, the years we dated? Nothing?" He writes that she thought for a moment and again said, "No."

In the book, Kelly talks about one of the most difficult parts of the injury for her family was Giffords' inability to come up with original questions.

"She either had no urge to ask a question, or more likely, the broken pathways in her brain weren't allowing it. It was sad for us to see this," Kelly writes. "All her life, Gabby had been a woman fueled by her curiosity."

He details the various steps - often painful - Giffords has gone through during her physical and mental rehabilitation - learning to walk, learning to speak.

Kelly writes that by late March his wife had been able to move into more complex speech therapy. He recounts a session with her therapist in which she is shown various photos, including one with a motorcyclist not wearing a helmet. She is asked what is missing. She responds, "Medical, Medical," waving her left hand over the photo. The therapist asked her what is missing. She said, "Scary. Scary. Medical," and then said, "Glasses," but sensing that was the wrong word she tries again and says "Helmuh." The therapist responded 'Yes!" and asked her without a helmet what would happen and she said, "Head," and asked again what would happen she answered "Bump, Bump."

In the book titled "Gabby," which went on sale Tuesday, Kelly talks about the couple's personal struggles - from his training to continue to be a NASA astronaut to his stepdaughters' earlier coolness towards Giffords.

Kelly wades into some political controversy in the book. He discusses Sarah Palin and her political action committee's poster showing some of the congressional districts where she hoped incumbents would be defeated with what could be interpreted as the crosshairs of a gun. One of those districts was Giffords'. Days after the attack, Palin posted a video calling any act of violence inexcusable and journalists and pundits "should not manufacture blood libel." .

Kelly says he thought Palin might reach out to him and that given there was a lot of discussion in the media that the former Alaska governor might "want to clear the air." He talks about how he had rehearsed what he might say.

" 'You are not responsible,' I planned to tell Sarah Palin. 'But you are irresponsible.' " He says he didn't know how Palin would have responded. "She may have been open to discussion. She may have said things that would not resonate with me. As it turned out, she never called," he writes.

A Palin spokesman did not return a message Tuesday seeking comment.

While saying they had received many political visitors, including President Barack Obama and former President George H. W. Bush, Kelly notes House Speaker John Boehner did come by while in Houston in April for the NCAA Final Four basketball tournament.

"Considering that she was a member of Congress and he was the highest ranking member, we thought he'd ask to visit Gabby, or at least give a call to see how she was doing. Our only contact with him had been a simple get-well card he'd sent a few days after Gabby was injured," he writes.

Boehner spokesman Michael Steel responded to the Giffords book by saying, "The Speaker and his staff have been in close contact with Rep. Giffords' staff throughout this difficult ordeal, and the Speaker met with Mr. Kelly in recent weeks about an appropriate memorial for slain staffer Gabe Zimmerman in the Capitol."

As to whether Giffords will run for re-election he notes the filing deadline is May of next year and writes, "As I saw how hard Gabby was working to get back to her job, how hard her staff was working, I didn't think it was fair to anyone - including all the people who had elected Gabby to that seat, and wanted her to represent them - to rush the decision. As I told Gabby, 'The time will come when you know you'll know what the right decision is. It'll be clear to you. Until then, you just keep getting better.' "

In a minute long audio message released Tuesday to her constiuents the three-term congresswoman said she hopes to return to her job soon. “I’m getting stronger. I’m getting better" adding “I want to get back to work. Representing Arizona is my honor.”