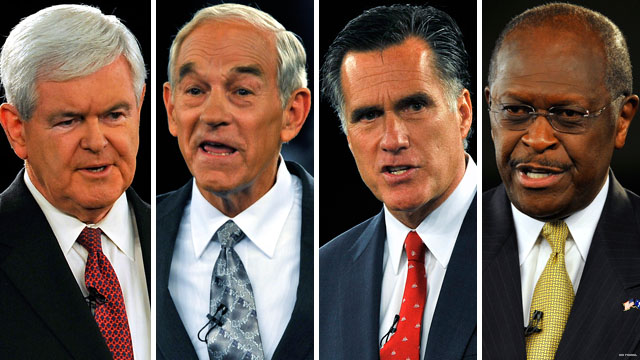 (CNN) - With the Iowa caucuses just seven weeks away, a new poll indicates that it's a four-way battle in the race for the GOP nomination in the Hawkeye State.

A Bloomberg News survey indicates 20% of Iowans likely to take part in the Republican caucuses say they support businessman Herman Cain for the nomination, with 19% backing Rep. Ron Paul of Texas, who's making his third run for the White House. Eighteen percent say they support former Massachusetts Gov. Mitt Romney, who's making his second run for the GOP nomination and 17% backing former House Speaker Newt Gingrich.

It's basically a four-way tie for the top spot when taking into account the survey's sampling error. The poll's Tuesday release comes seven weeks before Iowa's January 3 caucuses, which kick off the presidential primary and caucus calendar.

According to the survey, Texas Gov. Rick Perry's at 7%, Rep. Michele Bachmann of Minnesota's at 5%, former Sen. Rick Santorum of Pennsylvania's at 3% and former Utah Gov. and former ambassador to China Jon Huntsman's at 1%, with one in 10 unsure of who they'll support.

The poll also indicates that six in 10 say they could still change their minds on which candidate they are backing.

Selzer and Co. is a West Des Moines-based firm that also conducts the Iowa Poll for the Des Moines Register.

More than seven in 10 say that fiscal concerns are most important to them, with only around a quarter of likely caucus-goers saying social or constitutional issues are their top concern.

The Bloomberg News poll was conducted between November 10-12 with 503 adult Iowans who say they are likely to vote in the state's Republican caucuses questioned by telephone. The survey's sampling error is plus or minus 4.4 percentage points.