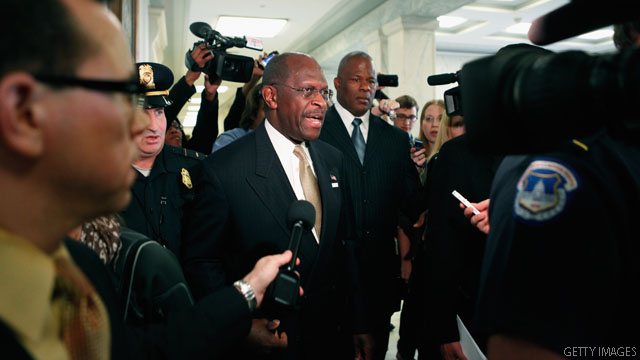 (CNN) – The editor of the Milwaukee Journal Sentinel criticized efforts by Herman Cain's campaign to discredit the newspaper's interview with the presidential candidate when he stumbled over questions on Libya and collective bargaining.

"Trying to spin it and say it was edited or handled some other way is just not accurate," Marty Kaiser said Tuesday on CNN's "American Morning."

After video of the interview went viral Monday, Cain Communications Director J.D. Gordon said the video was "out of context in some measure," adding that the former pizza executive endured 45 minutes of questions from the paper's editorial board.

Kaiser, who was in the room during the candidate's sit-down with the paper, said they were having a "pleasant conversation" and that some of Cain's answers left the reporters "stunned."

"I have to admit, quite a few of us have been in the business a long time, been through a number of these kinds of interviews, and afterwards we were really sort of stunned," Kaiser said.

Video of the interview shows the candidate pausing when asked if he agreed with President Barack Obama's handling of the situation in Libya. He then asks the reporters a question to "make sure we're all talking about the same thing," begins to answer, shifts around in his chair and eventually responds after the question is asked again.

Gordon said he ultimately delivered the correct answer, "it just took him a little while to get his bearings."

And Cain said he paused to "gather my thoughts."

"It's really complimentary when people start documenting my pauses," he said Monday at an event in Green Bay, Wisconsin. "You know, it's one thing to document every word. It was a pause, that's all it was. Good grief."