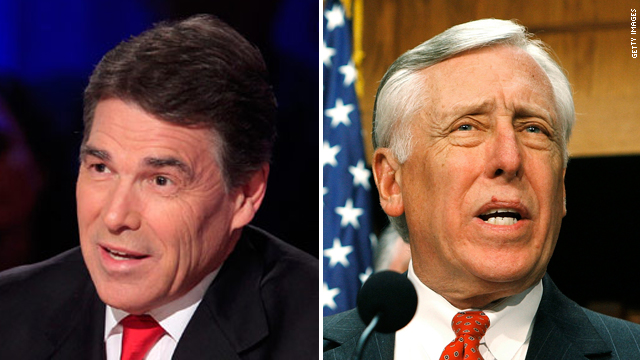 (CNN) - Texas Gov. Rick Perry fired back Tuesday after House Minority Whip Steny Hoyer questioned whether Perry's proposal to create a "part-time Congress" with fewer members and half the budget was serious.

Known for taking a strong anti-Washington stance on the campaign trail, Perry, who's making his first bid for president, spelled out his pledge to "uproot, tear down and rebuild" Washington on Tuesday during a stop in Bettendorf, Iowa.

His proposal includes creating a "part-time, Citizen Congress" that would cut current salaries in half and permit Congressional members to hold jobs in their home states. The plan would also drastically reduce the size of staff budgets and "force lawmakers to do more of their own work."

But in a press briefing, Hoyer asked if Perry's plan was a "serious proposal" during a time of high unemployment, criticizing it as a political ploy aimed at the right.

"If this is what he thinks is pandering to the tea party, it is not, in my opinion, speaking to the issues that the American public feels are very, very critical to them, jobs being the number one issue," Hoyer said. "So I don't think it's a very serious effort on his part."

Perry responded to Hoyer's remarks in two radio interviews on Tuesday, arguing the Washington metropolitan area "is the most affluent" in the country and that Congress is plagued with insider trading –all "at our expense," he added.

"It's not a surprise to me when I laid out this fundamental reform that I talk about and ask the American people to consider a part-time citizen Congress, that career politicians like Steny Hoyer don't like my plan to overhaul Washington," Perry said in an interview with Hannity. "They're making a great living up there."