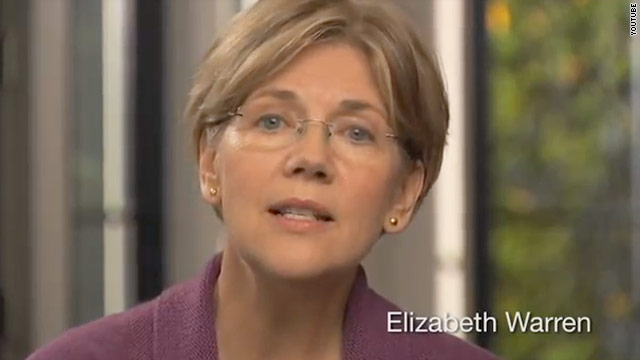 (CNN) – Starting Tuesday, voters in Massachusetts will be introduced, or reintroduced to Democratic Senate candidate Elizabeth Warren through the first TV advertisement of her campaign.

"It's a statewide buy that's aimed at allowing Elizabeth to tell her story and explain her fight to the people of Massachusetts," spokesman Kyle Sullivan said.

Talking into the camera, Warren chronicles her rise from humble beginnings and touts her opposition the power of Wall Street and Washington lobbyists.

"For years I worked to expose how Wall Street and the big banks are crushing middle class families. It just isn't right," Warren says in the commercial. "But Washington is still rigged for the big guys and that's got to change."

Since entering the race in September, Warren has raised millions toward her effort to capture the Democratic nomination and unseat Republican Sen. Scott Brown in the 2012 general election.

In a message Tuesday, Warren warned her supporters of the potential influence of outside groups, including Crossroads, which was co-founded by Republican strategist Karl Rove.

"With the help of friends like you, we can match them, dollar-for-dollar," Warren wrote in an email. "With your help, we can set the record straight - and show Rove and his buddies that we're not going to get pushed around."