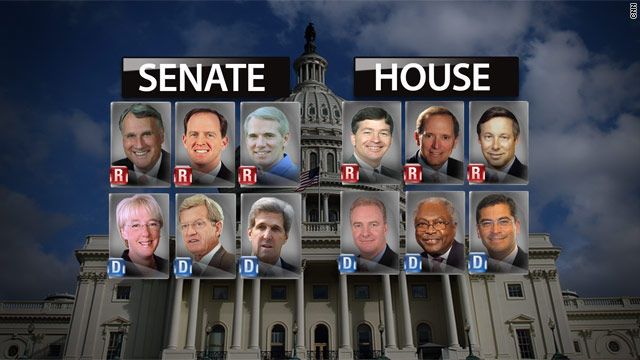 Washington (CNN) - Americans are skeptical that a congressional super committee will reach a deficit reduction agreement by next week's deadline, according to a new national survey.

And a CNN/ORC International Poll released Wednesday, one week before the panel's November 23 deadline, also indicates that a plurality of the overall public, as well as crucial independent voters, would blame the Republicans more than the Democrats if no agreement's reached.

Seventy-eight percent of people questioned in the survey say they think it is somewhat or very unlikely the committee will develop a plan to significantly reduce the federal budget deficit by November 23, with just over one in five saying it is likely a majority of the panel's six Democrats and six Republicans will reach an agreement.

The panel is charged with the very tough task of finding at least $1.2 trillion in savings over the next decade. Congressional leaders from both parties are trying to bridge the vast ideological divide over how much to raise taxes or cut spending.

Watch: Explain it to me: The 'super committee'

Who would be responsible if the super committee fails to reach agreement over the next week?

The poll indicates that 42% say they would blame the Republicans in Congress, with 32% blaming the Democrats, and another one in five volunteering that they would hold both parties equally responsible.

And what about those all important independent voters, who will be crucial to the outcome of next year's presidential and congressional elections? The survey indicates that by a 40% to 24% margin, independents would blame the Republicans more than the Democrats, with a quarter saying they would blame both parties.

If a majority of the 12-member panel does reach an agreement, Congress has one month, until December 23, to vote on the deal. A failure to pass any agreement will result in $1.2 trillion in automatic across-the-board spending cuts starting in 2013, evenly divided between defense and non-defense spending. Defense Secretary Leon Panetta warned members of Congress this week that such cuts could cripple the American military establishment.

The CNN poll was conducted by ORC International from November 11-13, with 1,036 adult Americans questioned by telephone. The survey's overall sampling error is plus or minus three percentage points.