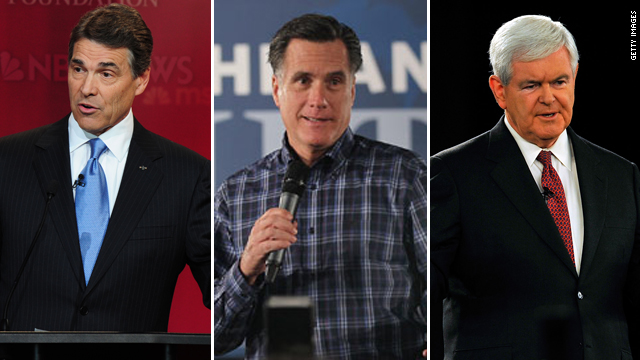 The Democratic National Committee teamed up with President Barack Obama's re-election campaign to target Mitt Romney, Newt Gingrich and Rick Perry for saying they would start all foreign aid commitments at "zero," then force governments to prove why they should earn assistance from the United States.

The candidates made their points in a Republican presidential debate on Saturday in South Carolina.

"Every country would start at zero," Perry said. "Obviously, Israel is a special ally. And my bet is that we would be funding them - at some substantial level. But it makes sense for everyone to come in at zero and make your case."

Both Gingrich and Romney said they agreed with Perry that the U.S. should "start everything at zero."

Democrats responded this week saying the three candidates "raced each other to the extremes of Tea Party isolationism" and sought to paint the three Republicans as misguided on Israel in a statement Wednesday.

"It's outrageous and dangerous - and it shows a critical ignorance of how a president needs to act," said DNC Chair Debbie Wasserman Schultz in a statement. "It is never responsible to raise doubts about our commitment to the security of a key ally like Israel."

Wasserman Schultz directed readers to Obama's campaign website where they can sign a petition in protest of the three candidates' comments.

"The cuts these candidates propose wouldn't make a dent in the deficit, but they would wreak absolute havoc on our foreign policy and America's standing in the world," Wasserman Schultz said.

But Romney's campaign has since maintained he was referring to Pakistan when he sided with Perry on the "zeroing out" policy and said he supports increasing military aid to Israel.

"The Democrats dishonest attack is a desperate attempt to distract from President Obama's derisive remarks about Israel's Prime Minister," said Andrea Saul, spokesperson for Romney. "At a moment when the Jewish state is isolated and under threat, we cannot have an American president who is disdainful of our special relationship with Israel. We have here yet another reason why we need new leadership in the White House."

Perry's team said the Texas governor has long been a friend of Israel and would continue to support the state if elected to the White House.

"Governor Perry has always been a strong supporter of Israel and was very clear in the recent debate that his support for Israel would continue as President," said Mark Miner, spokesman for Perry, in a statement.

Gingrich's campaign also expressed support for Israel in responding to the Democrats' attacks:

"In a merit-based foreign aid system, Israel is the last country that would need to worry about losing American support," press secretary R.C. Hammond said in an e-mail.