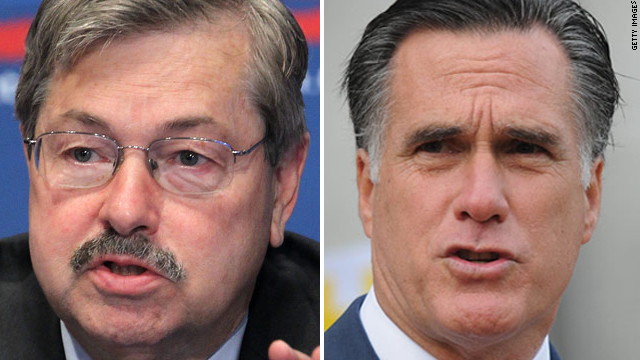 (CNN) - Iowa's Republican governor says he thinks Mitt Romney's making a mistake by not campaigning more in the state that kicks off the presidential caucus and primary calendar, but Romney's campaign says the candidate will be back in the Hawkeye State next week and will debate there next month.

"I think he's making a big mistake... by not coming here and spending more time," Gov. Terry Branstad said Wednesday at an energy forum in Des Moines sponsored by POLITICO. "I mean Romney is dropping in the polls and I think he thinks that he wants to keep down expectations, you know. Well, his expectations may get really bad if he doesn't get a little more serious."

The five-term governor also claimed that Romney could lose his bid for the GOP nomination if he doesn't perform well in Iowa's January 3 caucuses.

"I know Romney is putting his focus in New Hampshire, but if he gets clobbered here - if he comes in not in the top three but, say, fourth or fifth - I think that really damages his campaign on the national (level)," added Branstad.

While Romney returns to campaign in Iowa next week, he's only spent six days the state this year, which pales with the number of stops he's made in the first-in-the-nation primary state of New Hampshire, which votes second after the Iowa caucuses.

Earlier this month Romney skipped two major events in Iowa that were attended by most of the other GOP White House hopefuls. This Saturday he's not expected to attend a presidential forum being put on by the Family Leader, an influential social conservative group in Iowa. Rival candidates Herman Cain, Rick Perry, Newt Gingrich, Ron Paul, Rick Santorum and Michele Bachmann are scheduled to attend the event.

"Gov. Branstad is a great governor and a strong advocate for Iowa. We look forward to campaigning in Iowa next week and after, debating in the state and competing in the Iowa caucuses," says David Kochel, Romney's senior adviser in Iowa.

As of now, three debates are scheduled in Iowa in December.

"I think that the advisers in Boston don't get it, they're too far away from the reality," Branstad said. "They have that East Coast mentality. That was the same deal with (former New York Mayor) Rudy Giuliani. At this point four years ago, he was the front-runner...by the time it got to Florida he was out of it."

Branstad told POLITICO that he has shared his feelings with Romney and his campaign.

The campaign says it wants to win "wherever Governor Romney's name is on the ballot."

The candidate himself says the same thing. Asked by voters recently in Sioux City, Iowa, if he intends to pick up the pace, Romney said, "I will be here again and again, campaigning here. I want to get the support of the good people in Iowa. I'd love to win in Iowa. Any of us would. And so I'll campaign here. I intend to campaign in, well, in all the early states at least, and maybe all the states at some point."

Four years ago, Romney went big in Iowa, spending a lot of time and money there. But the strategy backfired when one-time longshot Mike Huckabee, the former governor of Arkansas, won the January 2008 caucuses.

Wounded in Iowa, Romney was then defeated by Sen. John McCain of Arizona, the eventual nominee, one week later in New Hampshire.

Even though he's only made cameo appearances so far in Iowa, Romney is basically all tied up with businessman and former Godfather's Pizza CEO Herman Cain, Rep. Ron Paul of Texas, and former House Speaker Newt Gingrich for the top spot among Hawkeye State Republicans, according to a Bloomberg News poll released Tuesday.

Some strategists say Romney doesn't need to win Iowa, considering that he's been the overwhelming front-runner in New Hampshire in just about every poll conducted over the past year. And some in Iowa agree.

"I don't think he has to win here. A second, third place, I think, would be fine for him. He does have a solid infrastructure here in people that support him," Becky Beach, an Iowa GOP activist who's undecided, told CNN's John King earlier this month.