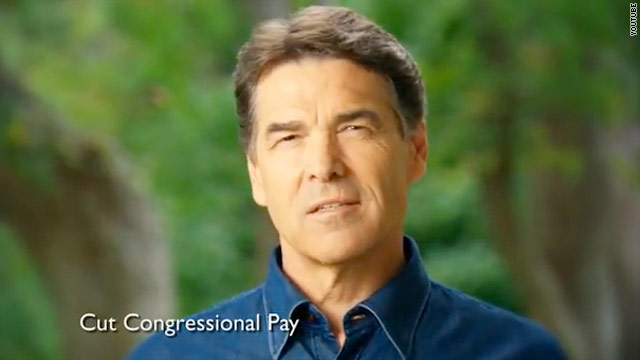 (CNN) - Rick Perry is hitting the airwaves for the third time in Iowa, selling his message of government reform while criticizing President Barack Obama's "socialist policies."

The 30-second spot, which will air nationally and in the first-in-the-nation caucus state, starts with a clip of Obama saying America has been a "little bit lazy" over the last few decades.

After labeling the president's comment "pathetic," Perry calls for a balanced budget amendment to the Constitution and decreased pay for members of Congress, pillars of his Washington reform plan put forth Tuesday.

"Obama's socialist policies are bankrupting America," Perry says in the spot. "We must stop him now."

The commercial, titled "Lazy," is the third such spot from the Texas governor, one of two candidates that have purchased ad time in the Hawkeye State ahead of January's caucuses. Rep. Ron Paul of Texas has also run ads in the state.

Although Perry's national and statewide poll numbers have dropped since his late entry into the race, he raised more than $17 million in the third fundraising quarter, enabling paid media buys.