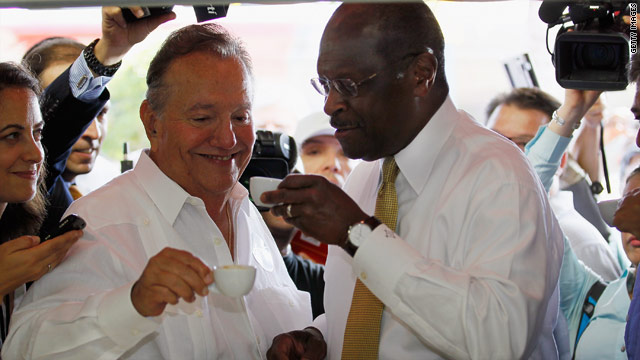 The Miami Herald reports that Cain's handlers then intercepted the questioning and rushed Cain away from the press. When he came back later, Cain didn't answer another question about the topic, instead saying, "Gotta run, gentleman," the newspaper reported.

In a speech earlier in the day, Cain seemed to outline his approach to Cuba without going into specifics.

"One of my principles is: Go to the source closest to the problem," Cain said. "I want to get from Cuban leaders [in South Florida] a solution of what we should do."

Cain, whose campaign surge kicked off in Florida about seven weeks ago when he won a closely-watched straw poll in the state, drew enthusiastic crowds throughout the day at different stops.

Later at Versailles Restaurant, located in Miami's Little Havana neighborhood, a reporter asked about President Barack Obama's decision to scale back some travel restrictions to Cuba, to which Cain reportedly said that was a "gotcha question."

Surrounded by much fanfare, Cain enjoyed a pastry at the restaurant's bakery, asking at one point with his mouth full, "How do you say 'delicious' in Cuban?"

A supporter quickly answered back: "Delicioso." The word is in Spanish, as there is no "Cuban" language.

The exchange was caught on a Fox News camera.

Later in the day, the Miami Herald reported that Cain had fleshed out his answer on the "wet-foot, dry-foot" policy. He said he didn't find it fair to force those who made it so close to the U.S. to go back to Cuba and risk going to prison, but added that he was opposed to the policy and that there must be "a better way."

Cain has repeatedly been criticized over his approach to foreign policy. On Monday he made headlines when he stumbled through his thoughts on Obama's actions in Libya, seeming to not understand U.S. involvement in a situation that's been in the international spotlight for much of the year.

He also raised eyebrows when he indicated last month in an interview that he was unaware China had nuclear capability, yet the country conducted its first nuclear weapon test back in 1964.

Others have criticized Cain's attitude toward international affairs, most notably hitting him for joking in an interview that he didn't know the president of "Ubeki-beki-beki-stan-stan." After the comment, Cain's campaign reportedly made a list of 20 foreign leaders that Cain should memorize.