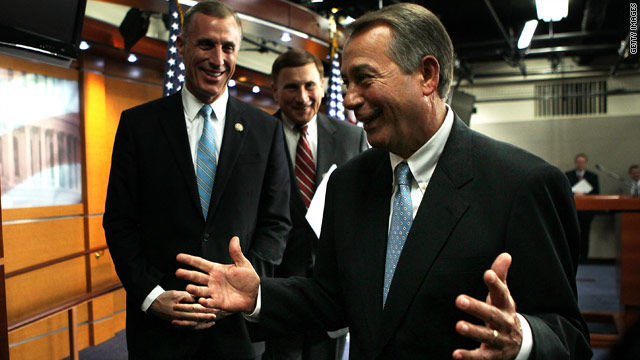 Washington (CNN) – What do you give as a birthday gift to the man who controls the U.S. House of Representatives? If you're the number three Republican in the House, you give him an iron - for his clothing.

"Kevin McCarthy got me a Rowenta iron," John Boehner of Ohio told a group of reporters curious about what he got on his big day.

This caused confusion among some of the reporters who hadn't heard of a Rowenta iron. One member of the press jokingly asked if it was a "four iron" for golf, eliciting a laugh from Boehner. The speaker apparently enjoys ironing his own shirts, so the gift from McCarthy, a Republican from California, could be characterized as practical.

Boehner, who turned 62 on Thursday, is famously or perhaps infamously known for the "Boehner birthday song," which he first sang on the House floor in 2006 to Rep. Ralph Hall, R-Texas, who was turning 83.

How does it go? According to the speaker there is only one verse, repeated twice. "This is your birthday song, it doesn't last too long, hey!"

Variations of his song were tweeted by other Republican members Thursday, including House Majority Leader Eric Cantor, who wrote, "This is your birthday tweet. It doesn't last too long. Hey! Happy Birthday to Speaker @JohnBoehner."