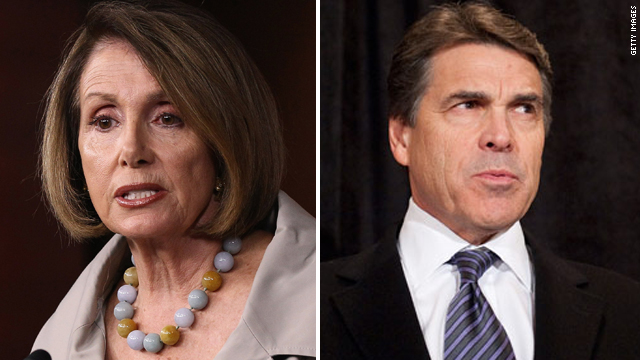 Washington (CNN) - House Minority Leader Nancy Pelosi declined Republican presidential candidate Rick Perry's debate invitation and poked a little fun at the Texas governor while she was at it.

"He did ask if I could debate here in Washington on Monday," Pelosi said, responding to a question about Perry's invitation. "It is my understanding that such a letter has come in. Monday I'm going to be in Portland in the morning and I'm going to be visiting some of our labs in the afternoon, that's two, I can't remember what the third thing is I'm going to be doing."

Pelosi was ribbing Perry for his recent debate gaffe when he couldn't recall the third government agency he would shut down if elected president during an awkward 54 seconds of air time.

Gov. Perry responded through his personal and campaign twitter accounts saying, "Something @NancyPelosi would like to forget: passing a 2k-page gov takeover of healthcare without reading it. American ppl haven't forgotten."

According the newspaper The Hill, Perry sent a letter to Pelosi saying, "I am in Washington Monday and would love to engage you in a public debate about my Overhaul Washington plan versus the congressional status quo. I think it would be a tremendous service to the American people to see a public airing of these differences," he continued. "Let the people decide. If Monday doesn't work, perhaps we could find a time in Iowa over the course of the next month to discuss these issues in front of the people of America's heartland."