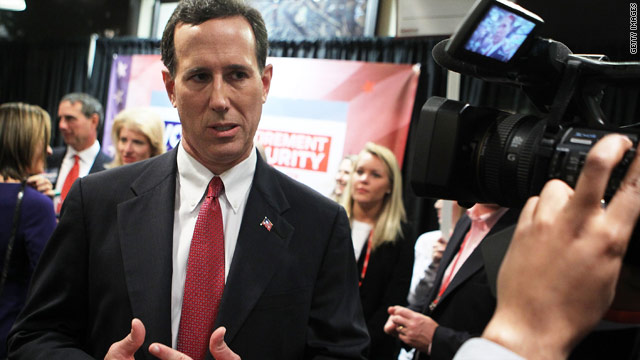 As some of his GOP rivals sell their plans with catchy names - such as Herman Cain's "9-9-9" plan or Texas Gov. Rick Perry's "Cut, Balance and Grow" – Santorum has simply titled his, "Made in America."

"It's a plan that may not have the sexy sales piece, may not have the bouffant haircut, but we're the guy that's going to deliver a plan and an economy that people want to live with," Santorum told CNN after describing its details to a group of about 20 people at a campaign event in the Southeastern Iowa city of Washington.

Santorum also proposes a measure that many conservatives favor: passing a balanced budget amendment to the U.S. Constitution.

As the former senator from Pennsylvania played up "Made in America," he also gave Iowa special praise for helping to inspire it.

The candidate – who bests his GOP rivals by having visited all of the Hawkeye State's 99 counties - told the crowd his plan "focused on some of the things that I've learned as I've traveled around Iowa."

"One of the things I've learned is that most of the small towns in Iowa … there was some sort of manufacturing or processing facility that was the reason for the town to exist in the first place, or it was a railroad hub or some sort of center of commerce."

"A lot of those manufacturing facilities have left … many of them moved overseas because we were just not competitive anymore," Santorum continued. "The business wasn't competitive or America just made it too hard to make the product here in this country."

Any economic proposal, Santorum said, should not "focus all of our growth and energy on the big cities and service industries and financial services."

Santorum has been mired in low poll numbers in surveys for Iowa and in national polls. Yet he is confident his message and focus on the state will help in the first-in-the-nation caucuses on Jan. 3.

"Six weeks ago, either Rick Perry was on top or Herman Cain was on top. Now Newt Gingrich is on top. You've seen these kind of dynamic shifts because people are still very much undecided," Santorum said. "The cool thing is that a lot of folks haven't focused a lot of time and attention on us. I think that's going to happen in Iowa in the next six weeks."