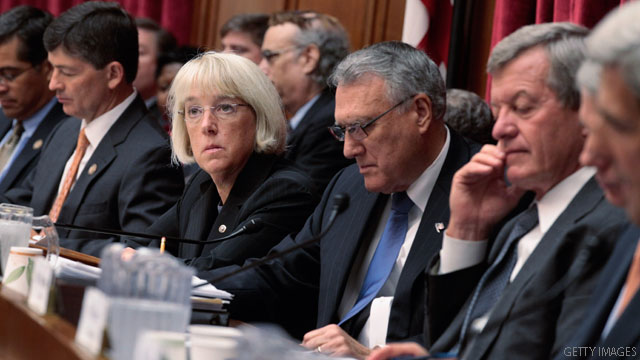 As evidence of the grim mood on Capitol Hill, multiple sources say Republican leaders have proposed a smaller package of spending cuts and revenues as a 'Plan B' if the panel does not succeed, though even this offer appears unlikely to gain much traction.

The smaller cuts are described by Republican sources as "low-hanging fruit," savings both Democrats and Republicans have shown support for in the past. This could include selling federal properties, sales of wireless spectrum and increased government fees among other things. But the plan, which would reduce the deficit by about $640 billion, was dismissed by Democratic leaders according to two Republican sources. Democrats, according to multiple sources, are insisting on a higher revenue component – such as eliminating oil and gas subsidies - to achieve the "balanced approach" they have sought all along.

Republicans, working with House Speaker John Boehner, R-Ohio, offered Democratic leaders this "backup plan" which included about $540 billion in mandatory spending cuts and fees, and about $3 billion in revenue from closing the corporate jets tax break said a GOP leadership aide and confirmed by a highly-placed Democratic source.

Sources say the focus has now shifted to finding a way to lessen the blow of the sequester - the automatic across-the-board cuts scheduled to set in if the super committee does not reach agreement on $1.2 trillion in deficit savings over 10 years.

Republicans as well as some Democrats are especially worried about automatic deep cuts targeting the defense budget.

However, it appears unlikely this latest proposal is going anywhere as talks appear to be breaking down over the same issue holding up previous negotiations – taxes. Multiple Democratic sources insist a smaller package like this is not viable if it lacks the "shared pain" that the super committee and the sequester demand. Republicans, on the other hand, remain opposed to tax increases without broader tax reform.

"Our (super committee) members continue to talk among themselves and with their Democratic colleagues about ways to reach the committee's goal, and whether Democrats will agree to any spending cuts without job-killing tax hikes," a GOP leadership aide said.

Sources caution that these latest discussions do not mean the super committee has given up on trying to hit its deficit reduction target by next week. Super committee members insist they are still talking on a bipartisan basis. However, the super committee appears to have made little progress and only has until next Wednesday to meet its statutory deadline.

-CNN's Ted Barrett and Deidre Walsh contributed to this story