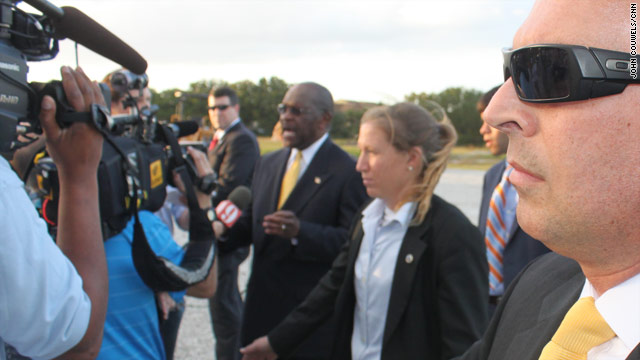 (CNN) - Republican presidential candidate Herman Cain made his first public comments about receiving protection from the United States Secret Service on Friday, telling reporters in Florida there were concerns from his campaign about his safety.

"We were in New Hampshire and there was some things that, quite frankly, made us feel a little uncomfortable," Cain said at a media availability event in Jacksonville. "So we are glad that the request was approved and it feels great because they do a great job of making things move seamlessly."

Earlier in Orlando, Cain said the protection was a normal next step to his campaign, which has been receiving a much greater level of media attention since he began to climb in the polls.

"It's just that it was time because of the popularity of my campaign," Cain said. "It was just time to go to that next step and I'm just glad that, you know, we were given that opportunity so we are delighted to have it."

Cain explained in Orlando that he had utilized his own security before this week, "but we wanted to move to that next level because of my ranking in the polls and the additional scrutiny that I have been getting."

The Secret Service confirmed on Thursday they were providing protection for Cain, who is the former CEO of the Godfather's pizza restaurant chain. Cain is the first candidate in the 2012 election cycle to receive protection from the agency.

Authorization for Cain's protection came from Homeland Security Secretary Janet Napolitano after she consulted with a congressional advisory committee.

In May 2007, then-Sen. Barack Obama became the earliest presidential candidate to receive protection from the Secret Service. Hillary Clinton already had a Secret Service detail at that time because she is a former First Lady.