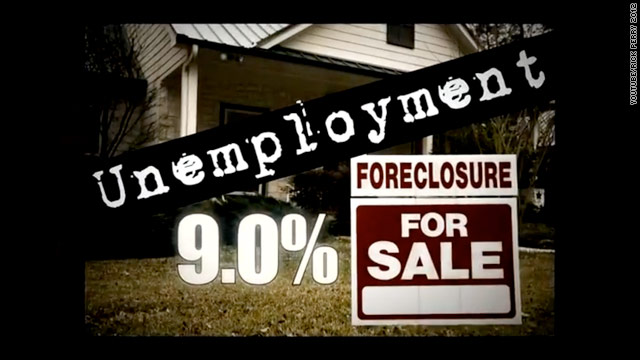 (CNN) - Texas Gov. Rick Perry's ad spree continued Saturday as the presidential candidate rolled out another spot that will run on Iowa broadcast stations, as well as national cable networks.

The 30-second ad, called "Outsider," paints Perry as a government reformer, noting his plan to radically change how Congress operates.

The ad starts with Perry saying "Washington's broken, and needs a complete overhaul."

Perry, wearing a denim shirt and standing outdoors, says the problems facing Washington could be fixed by someone like him, who isn't worried about offending politicians.

"I'm the outsider who's willing to step on some toes," Perry says. "I want to force Congress to balance the budget and if they don't, I say we cut their pay in half, send them home."

Perry's plan for Congress, unveiled earlier this week, would reduce the amount of time lawmakers spend in Washington, making what he referred to as a "part-time Congress." The plan would also substantially cut congressional salaries.

"Replacing one Washington insider with another won't change a thing," Perry says in the ad. "If you want an outsider who'll overhaul Washington, then I'm your guy."

In a statement accompanying the ad's release, a spokesman for Perry underscored the spot's message.

"We need a real outsider to overhaul Washington and cut the taxes, regulation and spending strangling our economy and of the GOP candidates Rick Perry is the only real Washington outsider in the race for the White House," Perry campaign communications director Ray Sullivan said in a statement. "Rick Perry is not the darling of the establishment has never served in Congress and has never professionally lobbied Congress or the White House. Gov. Perry is the only candidate Americans can trust to truly overhaul Washington and jump-start job creation."

"Outsider" is the fourth ad Perry has run in Iowa. Rep. Ron Paul has also purchased paid advertising in the state, which holds the first-in-the-nation presidential caucus in January.

Perry's poll numbers have dropped since an early peak over the summer, but successful third-quarter fundraising has allowed him to purchase television advertising time.