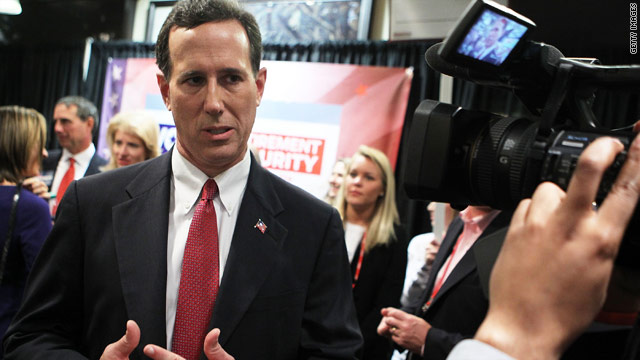 Santorum: Romney would have been 'uncomfortable' at Christian forum

Des Moines, Iowa (CNN) - Republican presidential contender Rick Santorum suggested Sunday that Mitt Romney's absence at a Christian forum held in Des Moines a day earlier was because he may not have been completely at ease in an environment discussing his faith.

"Clearly this was a forum that Mitt Romney was not particularly comfortable with," Santorum told reporters when asked for his reaction to the Republican frontrunner's decision to skip the event, which was held in a church and sponsored by The Family Leader, a conservative group. The event was aimed at getting to the heart of candidates' core moral and religious beliefs.

"It was one that was longer form and one that was much more personal, much more reflective of where you've been and where you're going, as opposed to just talking about the future in sound bites... I don't think that played to Gov. Romney's strengths," Santorum said.

Asked to elaborate, Santorum said he didn't think Romney would be comfortable in a setting that explores "why you believe what you believe and where that came from."

Romney is a member of the Mormon faith.

President and CEO of The Family Leader Bob Vander Plaats told reporters at the forum that Romney "lacks judgment" for deciding to hold an event in New Hampshire instead, adding that he "dissed" Christian conservatives.

"If he ends up being the nominee, this base has to be inspired to go to work for him. We're still a swing state," Vander Plaats said.

Santorum was also asked by reporters how he responds to the Obama administration singling out Romney in attacks, specifically in a speech given to Iowa Democrats Saturday night by former Obama Chief of Staff and current Chicago Mayor Rahm Emanuel.

"I encourage them to take shots at anybody they want to," Santorum said. "I hope for the day when they start taking shots at me."

Santorum spoke to reporters prior to a speech he was scheduled to give at a church in Des Moines.

Romney's campaign did not immediately respond to a request for comment.