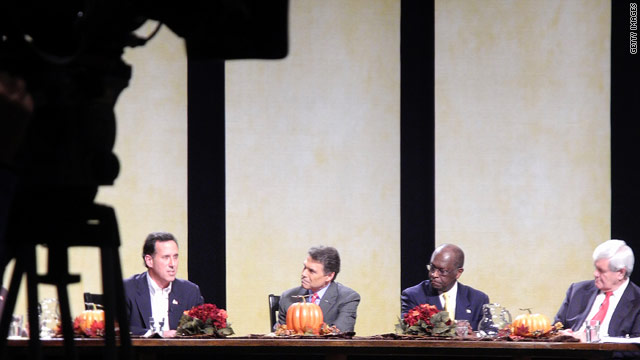 Des Moines, Iowa (CNN) - A gathering of six Republican presidential candidates and some 3,000 conservatives - most of them Christians - was marked as much by politeness and political posturing as by cheers, tears and jeers.

The "Thanksgiving Family Forum" in Des Moines, Iowa, was a friendly yet substantive discussion that centered on faith and family.

But the well-choreographed event could not prevent several unscripted moments: multiple GOP candidates choked with tears; protests from Occupy Wall Street sympathizers; an abrupt end to the conservative harmony after one candidate's political attack against another - and an absent Mitt Romney being accused of "lacking judgment."

The six candidates who attended the event were Michele Bachmann, Rick Perry, Herman Cain, Rick Santorum, Ron Paul and Newt Gingrich. The conservative group The Family Leader sponsored the event along with Focus on the Family affiliate Citizen Link and the National Organization for Marriage.

As the event began, a small group of Occupy Des Moines protesters descended on the parking lot of the First Federated Church.

"We are the 99%," they shouted under the watchful eyes of police but within earshot of attendees.

The demonstrators were not allowed to enter but their influence was felt inside.

Moments after the event started, Luntz made an offer that caused some jaws to drop.

"Because there are about 3,000 people here, it is reasonably likely that several people in here are from Occupy Wall Street," Luntz told the crowd. "I want to do something different."

"I would ask that there not be any disruption. But I will make you a deal...if you've come here to protest, take two minutes now, take the time now, and speak to everyone here about what's on your mind."

"In return, allow the rest of us the two hours," Luntz added.

As the surprised crowd waited, a man took to the main floor from his balcony seat. He did not identify himself as an Occupy Wall Street protester. But he did raise an issue regarding the Federal Reserve.

"I think that we need to speak about this bank tonight," he said, claiming that the Fed is "not part of the United States."

Moments later, the event began with the candidates appearing together on stage.

One by one, they spoke about their values, ideas, sense of morality and the proper roles for religion and government in society.

Common themes were criticisms of government intrusion into family lives, an emphasis on individual liberties, a calling out of judicial "activism," and the need for greater economic freedoms.

At one point, Luntz asked the candidates to describe a personal or professional experience that helped shape their faith and spirituality.

"If ever there was a place to bare your soul...this is the place to do it," Luntz said.

One by one the candidates articulated stories rarely heard on the campaign trail with similar candor.

Cain described his diagnosis of stage four cancer. The Georgia businessman stopped multiple times - unable to hold back tears - especially when describing the moment he and his wife left a doctor's office after learning of the diagnosis.

"I will never forget, before my wife and I were about to get in the car, I said, 'I can do this.' She said: 'We can do this,'" Cain said, wiping tears from his eyes.

Other candidates' stories were equally moving.

Perry revealed how "lost" he felt during a period of his youth when he was "too busy for God."

Paul talked about growing up during the Depression, making it through medical school, and "sharing new life" by delivering babies.

Bachmann talked about growing up poor, living through her parents' divorce and her father's leaving the home.

Gingrich talked about the child of a family friend born with a debilitating heart problem.

And Santorum stirred the crowd describing how his youngest daughter, Bella, struggled for life after she was born with the genetic disorder trisomy 18.

"They kept saying to us, 'You realize your child is going to die,'" Santorum said, referring to the girl's doctors. "You have to learn to let go," Santorum said a doctor advised he and his wife.

Choked up with tears, Santorum described how his daughter, now 3-and-a-half years old, survived but still suffers from the disorder.

After the event, one candidate quickly burst the bubble of harmony.

The email argued "Gingrich has positioned himself as open to watering down the Republican Party's commitment to the inalienable right to life and failed as the leader of the U.S. House of Representatives to stem the flow of taxpayer dollars to Planned Parenthood, the largest U.S. provider of abortions."

Reporters asked the former House Speaker about the timing of Bachmann's email and its merits.

"I'm not going to comment on emails I haven't read, issued at a point where we're all together here," Gingrich said.

Mitt Romney did not attend the event, instead choosing to hold a campaign event in New Hampshire during the same time.

Bob Vander Plaats, president and CEO of the Family Leader, also spoke to reporters after the event.

Saying Romney "dissed" Christian conservatives at this and previous similar events, Vander Plaats said: "If Gov. Romney were here, and if he could've displayed half the heart of these candidates around the table, it would've done his candidacy a world of good in Iowa and especially if he became the nominee. However, his choice to skip this event not only hurts him in the caucus process - if he ends up being the nominee, this base has to be inspired to go to work for him. We're still a swing state. And I think that's why he can't move his numbers."

Vander Plaats continued: "He wants to win the presidency. Which tells me he lacks judgment. And if he lacks judgment, I think people all across America have to say, 'Is he the right candidate?'"