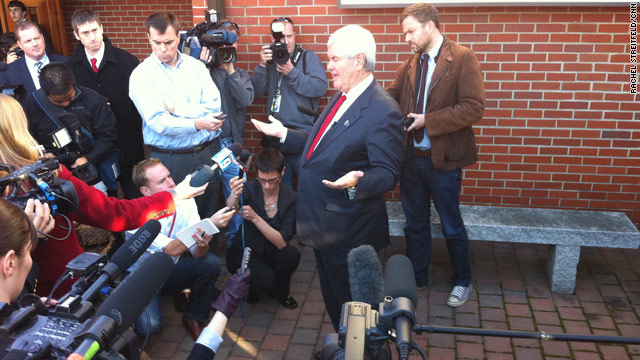 Keene, New Hampshire (CNN) - When Newt Gingrich speaks to crowds, his experience as a history professor is often apparent.

On Monday he said it's a job he would continue to do in the White House.

"I think I will probably teach a course when I am president," he told a group of students at St. Anselm College. "I think I will finally try to do something that outlines for the whole country what we will try to accomplish."

The former West Georgia College history and environmental studies professor said he would offer the course online through the University of Phoenix or Kaplan so any citizen could easily watch.

"Why wouldn't you want a president who would use social media to regularly and methodically tell you what we're trying to accomplish so those people who want to understand it can understand it," he said.

While giving speeches, Gingrich often adopts a pose more often seen on college campuses - leaning on one bent arm on the side of a podium.

He offers historical stories to illustrate his policy points, such as a frequently-repeated story about the Wright brothers' triumph over the Smithsonian Institution in the race to craft an airplane. The story is meant to speak to the superiority of the private over government in innovation.

One thing Gingrich said he wouldn't do as president? Spend a lot of time giving speeches.

"As president they would like you to only bother them when it really matters," he said of Americans, to audience laughter and applause.