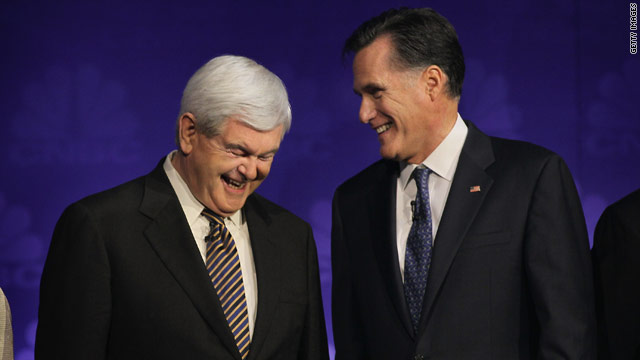 Washington (CNN) - A new national poll suggests a two-way battle between Mitt Romney and Newt Gingrich for the top spot in the race for the GOP presidential nomination, with Herman Cain close behind.

According to a USA Today/Gallup survey released Monday morning, 20% of Republicans and independents who lean towards the GOP say they are backing Romney, the former Massachusetts governor who's making his second bid for the White House, for their party's nomination. Nineteen percent support Gingrich, the former House Speaker who's been rising in the polls over the past month after his campaign hit rock bottom in the early summer. Romney's one-point margin over Gingrich is well within the poll's sampling error.

The survey indicates that 16% say that they are likely to support Cain for the nomination. The businessman, former Godfather's Pizza CEO and radio talk show host has seen his numbers slightly slip over the past three weeks due to a controversy over sexual harassment allegations. Rep. Ron Paul, who's making his third run for the presidency, is at 10%, Texas Gov. Rick Perry is at 8% and Rep. Michele Bachmann of Minnesota is at 5% in the poll. Former Utah Gov. and former ambassador to China Jon Huntsman and former Sen. Rick Santorum of Pennsylvania are each at 1% with nearly one in five saying they are not sure who they'll support.

The USA Today/Gallup poll was conducted Nov. 13-17, with 1,062 adult Americans, including 946 Republicans and independents who lean towards the GOP, questioned by telephone. The survey's sampling error for questions of the GOP horserace is plus or minus four percentage points.