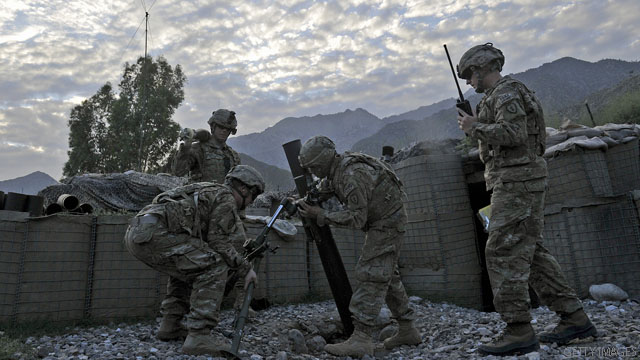 Washington (CNN) - Hours before a CNN GOP presidential debate that focuses heavily on national security and foreign affairs, a new national survey indicates there are wide partisan divides between Democrats and Republicans over some top global flashpoints.

Overall, Republicans are ready and willing to use U.S. military force in other countries; Independents and Democrats tend to be very reluctant to do so. From President Obama's decision to withdraw U.S. combat troops from Iraq, to the conflict in Afghanistan, aid to Israel, the practice of "waterboarding" and the political battle over immigration reform and border security, a CNN/ORC International Poll released Tuesday indicates a Democrats and Republicans don't see eye to eye.

The poll's release comes hours before the major Republican presidential candidates face off in a CNN presidential debate on national security, foreign policy and the economy. CNN is teaming up with the Heritage Foundation and American Enterprise Institute, two long time Republican-leaning think tanks, to put on the debate, which is being held just a few blocks from the White House.

While the candidates appear to be in agreement that President Barack Obama's presidency has mostly been a failure when it comes to foreign policy, and that the president's policies have only weakened the country's security, and its standing among the world's nations, they also disagree on some top issues that will come up in the debate.

"Republicans who tune into the debate will probably like what they hear. Most of the candidates have taken positions on these issues that strike a chord with the average GOP voter," says CNN Polling Director Keating Holland. "But Democrats and some independents who watch the debate may be turned off by what they hear."

Here's a breakdown of the poll, by issues.

USE OF MILITARY FORCE

Americans have grown increasingly reluctant to use U.S. military force around the world, but - unlike Democrats and independents - Republicans feel that the U.S. should be ready and willing to take military action. Overall, 53% of all Americans say the U.S. should be very reluctant to use military force, up from 38% in 2002, about a year after the 9/11 attacks. But there is a big partisan divide on that question, with a majority of Democrats and independents expressing reluctance but only four in ten Republicans feeling that way.

President Obama's plan to withdraw troops from Iraq by the end of the year is wildly popular among Democrats and independents, but most Republicans believe that Obama should keep some combat troops in Iraq beyond that deadline. One reason may be that a bare majority of Republicans continue to favor the war in Iraq; Democrats and independents are opposed to the war in large numbers. Overall, six in ten Americans say that they favor Obama's plan to bring all U.S. troops home from Iraq - not surprising when only 8% of the public believes that there are goals that the U.S. has not achieved in that country but would be able to do so if troops remained. But 54% of Republicans want to see a continued U.S. military presence in Iraq; only 42% agree with Obama's plan. There is a similar partisan divide on Afghanistan, which remains just about the only Obama policy that Republicans support.

Aid to Israel has been in the news recently as the result of some comments made at the last GOP debate, held earlier this month in South Carolina, but there is little debate among Republicans nationwide on that issue. Nearly seven in ten Republicans believe that economic aid to Israel should be increased or kept the same; more than eight in ten say the same about military aid to Israel. Democrats and independents are more likely to oppose either form of aid to Israel, although all groups favor military aid to that country.

The CNN poll was conducted by ORC International from November 18-20, with 1,019 adult Americans questioned by telephone. The survey's overall sampling error is plus or minus three percentage points.