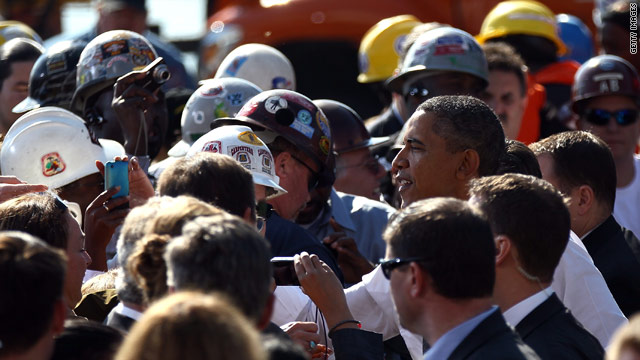 According to a CNN/ORC International Poll released Wednesday, 44% of Americans say they approve of the job the president's doing in the White House, with 54% saying they disapprove of how Obama is handling his duties. The president's approval rating has hovered in the same mid-40's range since June in CNN surveys.

But the poll indicates that there has been some change when Democrats are asked whether they want to see their party renominate Obama, with 26% of Democrats saying that they would prefer the party to nominate another Democrat for president next year, up from 18% in October.

Nonetheless, a robust 72% of Democrats are still in the president's corner - and in any case, the changes are strictly hypothetical, since there is no indication that Obama will face a serious challenger in any primary next year.

"The biggest change comes among white Democrats with no college education, a group typically considered the core of the party's blue-collar constituency," says CNN Polling Director Keating Holland. "Half of all white Democrats with no college education say they don't want President Obama heading their party's ticket next year."

Then-Sen. Obama's appeal to blue collar whites was limited in the 2008 cycle. In the Democratic primaries they tended to back his main rival, then-Sen. Hillary Clinton. And in the general election they went for the Sen. John McCain, the GOP presidential nominee, by 18 points, according to CNN exit polls.

The CNN survey indicates that the president's signature piece of domestic legislation - last year's health care reform bill - remains unpopular, although some of the opposition comes from people who think the bill should have gone farther. Thirty-eight percent favor the new health care law; 37% oppose it because they think it is too liberal and another 14% oppose it because they believe it is not liberal enough.

The CNN poll was conducted by ORC International from November 18-20, with 1,019 adult Americans, including 504 Democrats and independents who lean Democratic questioned by telephone. The survey's overall sampling error is plus or minus three percentage points.