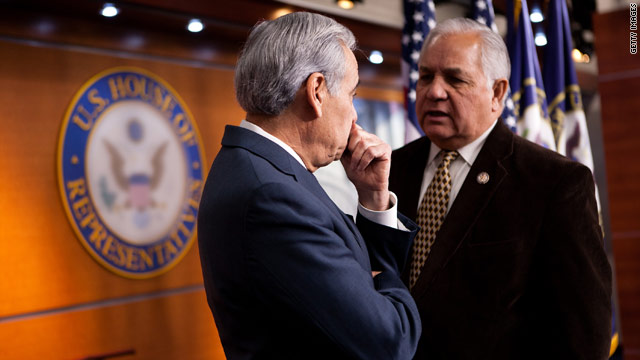 In a conference call with reporters, Gonzalez charged the former Massachusetts governor who's seeking the 2012 GOP presidential nomination for the second time with trying to "out pander his competition."

"We have a saying. It's about our Texas weather," Gonzalez said. "If you don't like it, wait two hours and it'll change."

"That's where Gov. Romney's coming from," he continued.

And Gonzalez, who has served the 20th District of Texas for seven terms, had a warning for the Latino community.

"Latinos need to be aware…not only is [Romney's] immigration stance wrong for them, but it's wrong for all Americans…it is bad economics," he said.

"He positions himself as a business person who makes wise business decisions…in fact what he's espousing really sets us back as a nation."

Gonzalez described Romney as placing himself in a "camp that is deportation-only" and which believes "anything short of deportation is amnesty."

"We know that's not a workable solution, it's not practical…but more, it doesn't serve the interest of this country."

Rep. Silvestre Reyes, a former border patrol agent, said Romney's debate performance fell below his expectations. "I was saddened by Mitt Romney's comments last night in the debate where he chastised former House Speaker Newt Gingrich when he said this country should have a humane immigration policy," Reyes said. "It is very, very disappointing the perceived Republican leader in the primary would make those kinds of statements and would articulate a policy that is contradictory to what our country stands for."

And, comparing Romney's Mormon faith with discrimination Latinos may face, Reyes argued, "He's the one who's had to endure the attacks on his religion and for him to take this position is perplexing."

"Attacking immigration policy…I don't know where he's coming from, I don't know what his values are," the eight-term congressman continued.

"His religion was attacked as being more of a cult, or people referred to it as being cult-like. Being subject to intolerance about his own religion, to me, you would think he would take a more tolerant view of what Gingrich was trying to promote, and that was the humane immigration policy for this country."

Firing back, Romney spokesman Andrea Saul said, "The last thing the White House wants is Mitt Romney as an opponent – which explains their obsessive focus on him and their 'all hands on deck' approach to their strategy of 'Kill Romney.'"