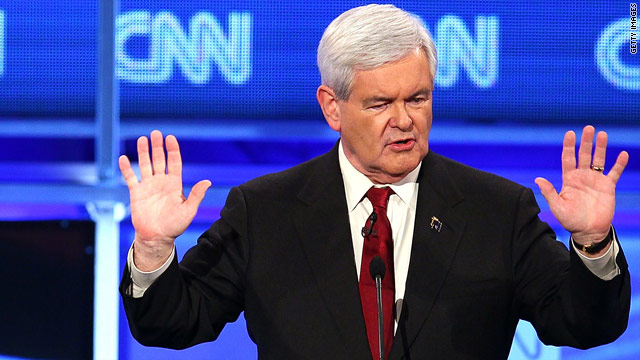 According to a survey by the American Research Group, Gingrich tops the poll with 27% of support among likely Republican caucus goers, with Romney following behind at 20%.

While the margin falls within the sampling error, the poll reflects a significant bump for Gingrich, up from 8% since the survey was last conducted in September.

The poll, which was done almost entirely before CNN's Republican National Security Debate on Tuesday, reflects a steady rise in support for Gingrich in recent weeks, which he largely attributes to even debate performances.

Also notable, Gingrich appears to have picked up a large portion of the tea party support in Iowa. Among likely GOP caucus-goers who identify with the grassroots movement, the former House Speaker led with 42%, up from 13% of tea party support in September. Texas Rep. Ron Paul followed behind at 19%.

The results in Iowa mirror a new CNN/ORC International Poll released Monday, which showed Gingrich at the top of the GOP field nationwide with 24%, with Romney in second at 20%.

The American Research Group interviewed 600 likely Republican caucus-goers in Iowa by telephone Nov. 17-23, with a sampling error of plus or minus four percentage points.