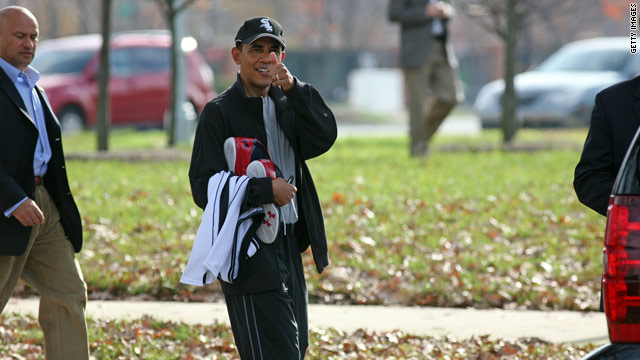 (CNN) - After playing basketball at Washington's Fort McNair Army Base on Saturday, President Barack Obama seemed to approve the tentative deal reached earlier in the day to end the NBA lockout.

When asked about the potential agreement, Obama gave a thumbs-up and said, "Good deal!"

NBA Commissioner David Stern announced Saturday that players and owners appear to have come close to an understanding that could lead to a Christmas Day opener for the basketball season.

But even before that, fans will get a chance to see some pros face off in Washington in mid-December, that is if they're willing to dish out some campaign cash for the president.

Other players include Patrick Ewing, Blake Griffin and Dwight Howard, and two female players: Cheryl Miller and Tina Thompson. More players will be added before the event, according to the Obama campaign.

The president will attend the Oregon State vs. Towson basketball game in Maryland Saturday afternoon.