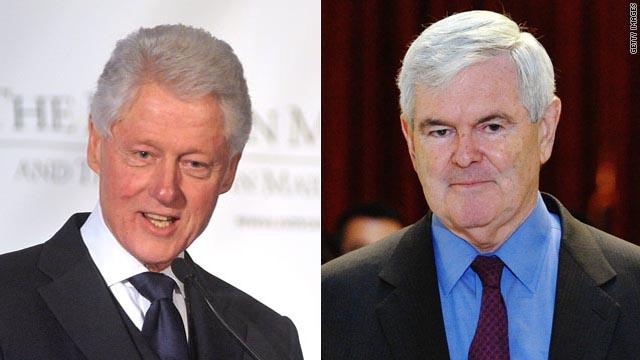 In an interview with the conservative online publication Newsmax, Clinton said Gingrich’s positions on immigration would help him appeal to independent voters.

“He’s articulate and he tries to think of a conservative version of an idea that will solve a legitimate problem,” Clinton said.

He continued: “For example, I watched the national security debate ... And Newt said two things that would make an independent voter say, ‘Well, I gotta consider that.’”

At Tuesday’s CNN National Security Debate, Gingrich staked out a position that he said was a “humane” approach to immigrants who are living in the United State illegally.

"If you've come here recently, you have no ties to this country, you ought to go home, period," Gingrich said Tuesday. "If you've been here 25 years and you got three kids and two grandkids, you've been paying taxes and obeying the law, you belong to a local church, I don't think we're going to separate you from your family, uproot you forcefully and kick you out."

Clinton said the idea was a good compromise between positions offered by the left and the right.

“That sort of splits the difference between the immigration reforms proposed by President Bush and President Obama, which would give a path to citizenship, and would be a version of what President Reagan did,” Clinton said.

Clinton wouldn’t predict a win for Gingrich in the race for the GOP nomination, saying other candidates including Mitt Romney were still putting in strong performances.

“I still think Romney comes across as strong and forceful and knowledgeable, and I think Perry did much better than he’s been doing,” Clinton said. “I think Gingrich is back in the race because he’s spent a lot of his time in life thinking about these things. And he’s gotten in trouble because of people who have an ideology instead of a philosophy, because at various times he’s supported doing something about climate change, which is anathema to extremes in the Republican Party. But he’s being rewarded for thinking.”

In the 1990s, Clinton and Gingrich were often at odds as the leaders of their respective parties. A standoff between the two men over federal spending led to a government shutdown in 1995, and Gingrich was at the forefront in backing Clinton’s impeachment on perjury charges.

The two did work together on certain legislation, including welfare reform later in the decade.