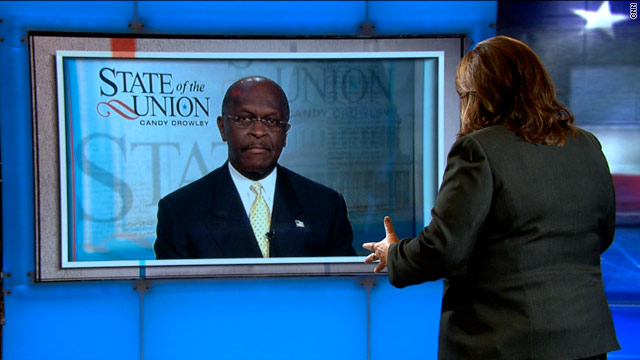 (CNN) - Herman Cain ascribed his recent drop in the polls to false sexual harassment allegations and voter confusion about his positions on abortion and foreign policy, saying Sunday that some of his remarks over the past month had been taken out of context.

“Obviously false accusations and confusion about some of my positions has contributed to it,” Cain said on CNN’s “State of the Union” when asked by host Candy Crowley about his campaign’s flagging poll numbers.

Cain said criticism over his position on abortion and foreign policy matters was fueled largely by comments that were taken out of context, leading to voter confusion.

“Some people are heavily influenced by perception more so than reality,” Cain said. “The good news is most of my supporters have stayed on the Cain train, as we say.”

In October, Cain made highly publicized remarks on CNN’s “Piers Morgan Tonight” in which it seemed the former Godfather’s Pizza executive was loosening his position on restricting abortion. Cain said Sunday those comments were taken out of context.

“That whole segment I talked about my position on life from conception, no exceptions,” Cain said. “They didn't show that. Then he basically raised a highly hypothetical situation relative to if it were my granddaughter and that's when they took that part out of context because of a poor choice of words. In retrospect they later got blown out and it became the story.”

On the issue of illegal immigration, Cain restated his support for enforcing laws currently in place, but said he would allow states to deal individually with immigrants. When asked if that meant allowing states to extend amnesty to immigrants, Cain said he wouldn’t use that word.

When asked by Crowley about the position he staked out at CNN’s National Security Debate Tuesday on “targeted identification” at airport security checkpoints, Cain said he was simply proposing the most sensible solution to protect Americans.

He said he didn’t use the term “profiling” because of its use in other situations.

“Targeted identification is a deliberate approach to figure out patterns associated with people who have tried to kill us,” Cain said. “That's what that is. Profiling has been used in a lot of other situations and it obscures the whole issue.”