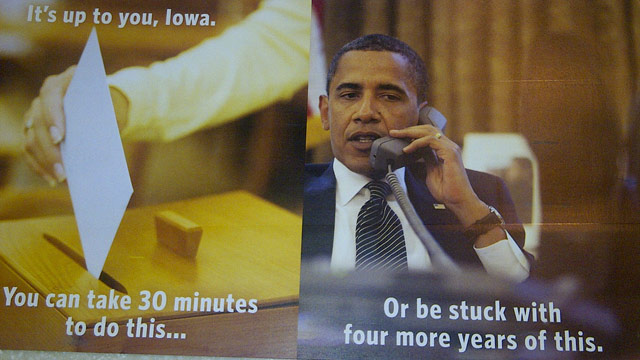 (CNN) - As the Romney campaign decides how hard to campaign in Iowa, voters there on Saturday opened their mailboxes to find several different mailers from it touting the candidate's positions on immigration, marriage and values. This marks the first known paid-advertising effort by the Romney camp in the state.

Such issues as immigration and marriage are key for many of the conservative activists who comprise alarge portion caucus attendees.

In one of the flyers obtained by CNN, the campaign emphasizes the former Massachusetts governor's tough stance on the hot-button issue of immigration, with the flyer saying at the top: "Mitt Romney. The strongest Republican to beat Barack Obama and end illegal immigration."

The mailing highlights Romney's stances opposing taxpayer-funded benefits for illegal immigrants, working to ensure that employers can confirm the legal status of employees, and supporting building a border fence.

Romney has criticized fellow candidates Rick Perry, who has supported in-state college tuition for the children of illegal immigrants and who has criticized a border fence as ineffective; and Newt Gingrich, who last week in the CNN foreign policy debate repeated his support for moving some of the approximately 11 million illegal immigrants in the United States towards some form of legal status as the humane option for dealing with the problem.

Gingrich, who has repeatedly said that would not be amnesty because they would not be offered automatic citizenship, nonetheless has been criticized by many on the right since the debate for his stance.

Another flyer sent out, according to the Des Moines Register, tries to reassures wary conservatives who have raised questions about Romney's social record. It specifically highlights his positions on same-sex marriage and abortion - key issues for those conservatives after many on the right have accused him of flip-flopping, especially for earlier supporting a woman's right to choose on abortion but later changing his position.

The flyer says "Pro-Life: Mitt Romney believes that life begins at conception and opposes abortion. Pro-marriage: As governor, Mitt Romney fought against gay marriage in Massachusetts. He supports a federal amendment to define marriage as between one man and one woman."

That mailer also touts Romney as "Pro-family: Mitt Romney lives his values," talking about his being married to his wife, Ann, for 42 years. While it doesn't mention other candidates, it will not be lost on many that Gingrich, who is currently on top in Iowa, is on his third marriage.

With the January 3 caucuses just over a month away, all of the candidates can be expected to pick up the pace of their campaigning in the state.

How Romney, who spent $10 million in Iowa in 2008 but did not come with away with a victory, competes there this time is a major unanswered question. He has stayed in contact with his 2008 supporters, visited the state again last week and quietly opened a campaign headquarters there.

Romney is running second in the state according to the most recent American Research Group poll there, and some analysts say the anti-Romney vote could be split among several contenders giving him a major opportunity to do well. CNN's Shannon Travis, however, reported last week several leading conservative activists in the state are trying to help build support among one of those candidates to prevent Romney from winning the caucuses.