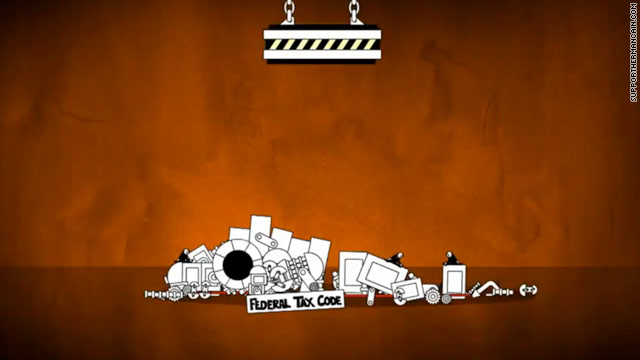 (CNN) - After a month of battling sexual harassment allegations and getting caught in uncomfortable foreign policy gaffes, Herman Cain is returning to one position he knows well: The 9-9-9 tax plan.

In a four-minute video released Monday, the former Godfather's Pizza executive and Republican presidential candidate recaps his tax reform plan that would create a 9% national sales tax, a 9% income tax, and a 9% corporate tax.

The animated spot, called "9-9-9 The Movie," presents the current tax code as a large, cumbersome machine.

"The federal tax code is an overgrown monster," the narrator says. "But it's not even a cool monster, it's a dorky mechanical monster held together with a bunch of tattered red tape and driven around by squirrelly bureaucrats."

The ad says under Cain's 9-9-9 plan, the "economy would accelerate faster than Barack Obama on his way out of town."

Various scenarios are presented comparing the current tax code to the proposed plan, all using animated figures and upbeat music.

It concludes: "The 9-9-9 plan is simple enough to vanquish the ineffective bureaucrats that lurk in the dark crannies of complexity, transparent enough to deter cronyism, and fair enough the level the playing field."

The ad notes that they're using the definition of fair from the dictionary, not the "president's class warfare definition."

Cain's aggressive promotion of the 9-9-9 tax plan earlier this fall led to a steep rise in the candidate's poll numbers, but a series of sexual harassment allegations (which Cain denies) and several blunders on foreign policy have brought those numbers back down.

Cain will sit down for a live interview with CNN's Wolf Blitzer Monday after attending closed-door meetings in Tyson's Corner, Virginia. The segment will air during "The Situation Room," starting at 4 p.m. ET.