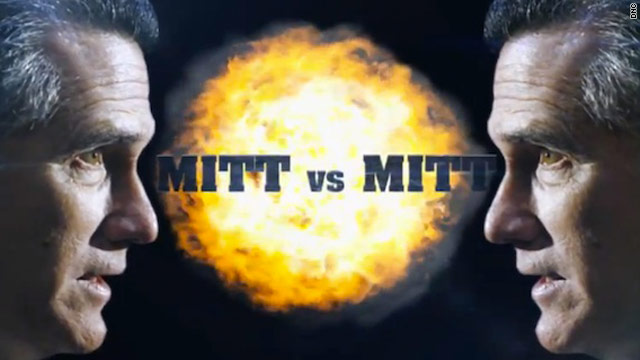 The ad is the latest in a string of attempts by the Democratic National Committee to paint the former Massachusetts governor as inconsistent, and is another indication that national Democrats are singularly focused on Romney as the likely opponent to Obama in the 2012 general election.

The 30-second ad, called "Trapped," will run on broadcast and cable networks in New Mexico, North Carolina, Ohio, Pennsylvania, Washington, D.C., and Wisconsin, the DNC said. It also said it will hold viewing parties and press events in other states to showcase a longer video that tears apart Romney's record.

The video is made in the style of an action movie trailer, with flashy graphics and throbbing electronic music.

In "Trapped," a narrator says: "From the creator of 'I'm running for office for Pete's sake' comes the story of two men trapped in one body: Mitt versus Mitt."

The ad goes on to show what seem like inconsistencies in Romney's record, including dueling remarks he made on abortion.

On another issue, the DNC ad attempts to portray Romney waffling on health care plans. He is shown as saying: "We put together an exchange, and the president's copying that idea. I'm glad to hear that."

That quote, from a 2009 interview with CBS News, also fails to capture Romney's full sentiment. In the same answer, Romney chided Obama for taking the wrong direction on health care.

"You don't set up a government insurance plan because it's going to end up costing billions of dollars in subsidy. It's the wrong way to go," Romney said.

The former governor's campaign came under harsh criticism itself last week for taking comments out of context when it ran an ad showing Obama seemingly making a statement about the economy. The president was actually quoting Sen. John McCain.

Monday's ad release isn't the first time the DNC has paid for advertising space to criticize Romney. The organization previously made television ad buys in Iowa and Arizona, slamming Romney's position on corporations and housing, and bought newspaper ads in Detroit, Michigan, thumping the candidate for not supporting a bailout of the auto industry.

In a statement, Romney's campaign spokesman said Democrats' focus on the GOP candidate was a distraction from real issues like jobs and the economy.

“President Obama has failed to create a single net new job and has wreaked more havoc on the middle class than any president in modern history," Andrea Saul said in a statement. "The last thing the White House wants is to have to run against Mitt Romney and be held accountable for the many failures of this Administration. So, instead of focusing on the economy and creating jobs, President Obama and Democrats are focused on tearing down Mitt Romney.”