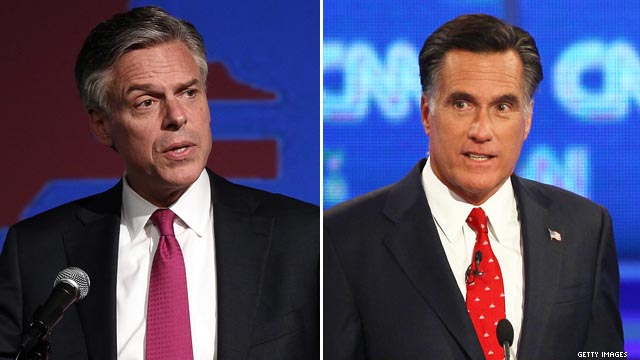 The former Utah governor unveiled a new line of attack against Romney, casting doubt on whether the former Massachusetts governor could dramatically shake up Washington and tackle Wall Street reform.

"Anyone who is in the hip pocket of Wall Street because of all the donations they are picking up, like Mr. Romney, is in these days not going to be the change agent who is going to fix the too-big-to-fail banking system," Huntsman said.

The candidate, who touts his civil approach to campaigning and rarely mentions other candidates by name, also told the audience:

"You should be wary of any candidate who carries the endorsements of every member of Congress, because it means they're going to be a status-quo president."

Huntsman spoke to an audience of about 80 voters in a town hall building in Merrimack.

He offered three suggestions for tackling congressional gridlock: limit the terms a member may serve; institute a lifetime ban preventing a former member from lobbying; and tie members' pay to their output.

"I want to cut the pay of members of Congress until they can balance the damn budget," he said, citing a "corrosive" lack of trust in Congress.

Huntsman will campaign in New Hampshire through Thursday, then head to South Carolina for the weekend.