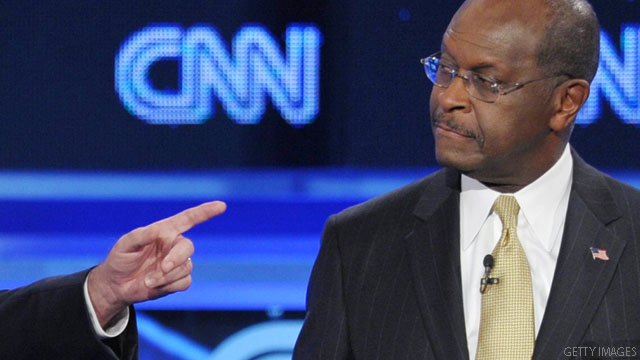 (CNN) – Some of the Republican presidential candidates responded Tuesday to the charge that Herman Cain engaged in a lengthy extramarital affair, with rival Jon Huntsman issuing the strongest reaction.

Huntsman, the former Utah governor, said Cain should consider exiting the 2012 race for the White House.

"And I think that's a disservice to the voters," Huntsman added.

On Monday, Atlanta businesswoman Ginger White accused Cain of having had an affair with her that lasted nearly 14 years, a claim Cain immediately denied. But the former pizza executive and radio talk show host, who faced accusations of sexual harassment earlier in the month, told his staff Tuesday he is "reassessing" the viability of his campaign. One top campaign source told CNN he expects a decision "within a few days."

Fellow candidate and Minnesota Rep. Michele Bachmann responded to the news, saying the campaign seems to be assessing their support in the wake of the allegations. She added that the revelation is yet another example she is the "consistent conservative in the race."

"As people have been shopping around for candidates they're going to come back home to see I've been the consistent constitutional conservative who's going to fight," Bachmann told WHO Radio in Des Moines, Iowa.

Former House Speaker Newt Gingrich, who has admitted to engaging in romantic relationships outside his marriages in the past, said it is a difficult situation for Cain and his family.

"I hope that he reaches whatever is the right decision for them," Gingrich told reporters in Bluffton, South Carolina Tuesday. "I think it's his decision to make. And he has to do what he thinks is best."