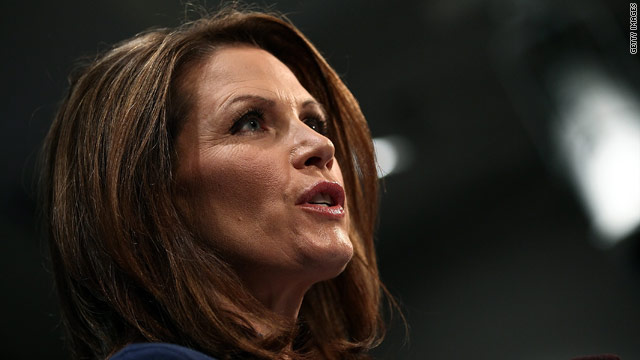 (CNN) – Minnesota Rep. Michele Bachmann didn't directly comment on the controversy surrounding GOP rival Herman Cain and his presidential prospects Tuesday, but aimed an arsenal of criticism at the current frontrunners for the 2012 presidential nomination.

Trumpeting her credentials as a “consistent conservative” on CNN’s “The Situation Room,” Bachmann said both former Massachusetts Gov. Mitt Romney and former House Speaker Newt Gingrich “have a lot to answer for the voters on being on both sides of the issues.”

In an earlier interview on Iowa radio, Bachman observed that Cain's campaign is "looking at the viability of their effort going forward, and they're seeing that their support has really dropped out from the campaign because of those questions."

"And that goes back to the message that we've been trying to get out to folks across Iowa is that fact that I do have a core of conviction," she said.

When asked on CNN what she’d tell Cain supporters in the event their candidate drops out of the race, Bachmann said she’d woo them with consistency.

“I would tell them that I’ve been the consistent conservative from the beginning of this race,” she said.

“You can look at the other candidates, you see a lot of inconsistencies, a lot of flipping back and forth. You don’t see that with me,” Bachmann asserted.

She took aim at two candidates at the top of the GOP presidential pack, currently Romney and Gingrich, according to recent national polls. Criticizing Gingrich for what she called “inconsistent” positions on immigration reform, Libya, the Troubled Asset Relief Fund, health care and global warming, Bachmann followed up with a stinging critique of Romney.

“It’s highly doubtful to think that our Republican nominee could have championed the individual healthcare mandate, have taken millions of dollars to advance that mandate, and then think that they're actively going to work to repeal Obamacare," she said of Gingrich.

Calling Romney's Massachusetts healthcare initiative a “pattern for Obamacare” she continued, "On issue after issue Gov. Romney has been on both sides,” including abortion and same-sex marriage in her list.

Boasting a campaign that’s featured “no surprises,” Bachmann said of her own record as a congresswoman in her third term, “I’ve had a very consistent walk and talk in Washington, D.C.”