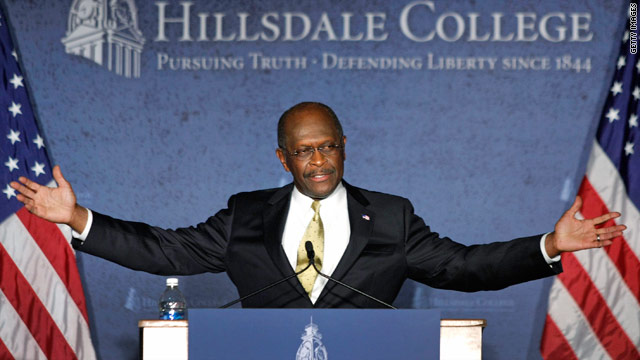 Hillsdale, Michigan (CNN) – Republican presidential candidate Herman Cain laid out his foreign policy and national security strategy on Tuesday - and attempted to slam the Obama administration's credibility in those areas.

The candidate also used noteworthy tactics to make some of his points: citing Facebook to explain America's "friends" and enemies, speaking without a teleprompter amid questions about his foreign policy expertise and providing a rare glimpse into his personal life.

Yet in a day dominated by political news coverage of an alleged extramarital affair involving Cain, his denial and his intention to reassess his campaign in the wake of the allegations - the event at Hillsdale College in Hillsdale, Michigan was free of any talk of it from the candidate himself.

Veiled comments in Cain's opening remarks suggested he might address the issue from the stage.

"Life can be a challenge. Life can seem impossible," Cain said. "It's never easy when there's so much on the line."

And yet Cain followed the comments with an apparent lecture to the attending students, delivered in typical Cain fashion - in a rhyme.

"You can make a difference. There's a mission just for you. Just look inside. And you will find, just what you can do," Cain said.

From there, the conservative Georgia businessman waded into complex foreign policy, seemingly to silence critics who have questioned his prowess in that area.

"What can the United States of America do as it relates to peace in the world? I happen to believe that national security and foreign policy are inseparable," Cain said.

"In terms of what we need to do to play our role – not as policemen for the world, but as the leader in peace for the world."

"Without a strong national security effort, foreign policy will be too foreign."

Cain reiterated the mantra he's recently used to explain what his campaign calls the Cain Doctrine. The candidate's "peace through strength and clarity" stance is a riff of the conservative slogan credited to President Ronald Reagan.

Cain stressed three areas on which the U.S. must flex its muscle: through military, economic and moral strength.

"I happen to believe we have allowed our military to get too weak," Cain said at one point, citing the lowest number of active U.S. ships "since 1915."

"That's not strength. The world is not safer," Cain continued, vowing to increase the number of active ships in a Cain administration.

"Rather than the current philosophy of cut, cut, cut, I believe that our priorities should be invest, invest, invest," Cain added, referring to past and intended budget cuts to the military.

On economic strength, Cain talked about American exceptionalism pushing the nation toward a 25% Gross Domestic Product despite having only 4.5% of the world's population.

"We have done so much with so little," Cain said.

As he often does, the candidate cast the Obama administration's policies on national security and foreign affairs as misguided and anemic.

"U.S. leadership right now has slipped because of weak policies and, in all honesty, weak leadership which starts at the top," Cain said.

He reiterated his criticism of the U.S. troop withdrawal plan for Iraq, saying it will create a "power vacuum" to be filled by negative elements in Iran. And Cain warned: "In Afghanistan we run the same risk of leaving too soon."

Cain also talked about an uncertain future in the relationship between the U.S. and Pakistan and expanded on how he would combat terrorists and cyberattacks.

While laying out his thoughts on America's friends and enemies, Cain displayed the global density of Facebook connections on a map.

"You'll also note on this map that some of the darkest areas are the Communist areas because they deny their citizens access to this global economy and this global information source called the Internet," Cain added. On the map, North Korea, Iran and Russia remained dark.

On moral strength, Cain recalled a story that not only elicited laughs from the audience but also provided a rare glimpse into the Cain household.

The candidate recalled his shock while watching the U.S. Open last year and hearing a group of children omit the words "under God" from the Pledge of Allegiance.

"I was sitting in my favorite chair, in front of the TV next to the kitchen. [My wife] was in the kitchen preparing dinner," Cain said, causing light giggles from the audience.

"What?" Cain joked. "That's what we do in our house on a Sunday. I sit in the easy chair and she prepares dinner."