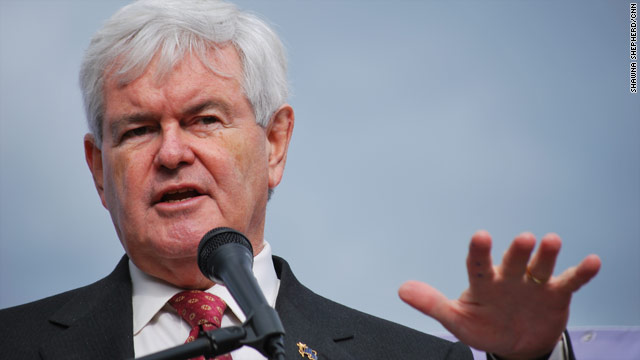 "I think in my case, because I rose based on substance, it's a different phenomena. It took longer; it was slower. And I think people are more deeply committed," Gingrich said Tuesday.

The former House speaker was attending the grand opening of his Beaufort County field office, located near the Bluffton Promenade, a new business community designed to look like a quaint old Main Street, U.S.A.

Gingrich has been on the rise, thanks in part to solid debate performances that have highlighted his intellectual, matter-of-fact approach to issues.

An influx of campaign cash has allowed the once-fledgling presidential candidate to build up "dramatically more robust" operations in the early primary and caucus states of Iowa, New Hampshire and South Carolina, where he stands a chance to emerge as the conservative alternative to former Massachusetts Gov. Mitt Romney.

"We have a larger team here than any other candidate and have a bigger ground game, and have a huge tea party support here and I'm going to continue to campaign very aggressively here in South Carolina," Gingrich said.

Less than two months ago, Gingrich was attending more intimate campaign events in South Carolina. They centered on his documentary and books, as well as his wife Callista's children's book about America exceptionalism. The main character, Ellis the Elephant, would show up in costume.

On his three-day campaign swing through the first southern primary state this week, Gingrich is addressing crowds in the hundreds, and his wife is doing separate book events.

As enthusiastic as the crowds appear, skepticism remains whether Gingrich can sustain the momentum, clinch the nomination and beat President Barack Obama.

During a town hall event outside on the Bluffton Promenade, one man asked the White House hopeful: "I'm concerned about the election. My goal is to singularly remove Obama from the presidency, and I'm concerned that we won't pick up the independents and I need to know how you're going to do that, because that's who I'm going to support."

Gingrich assured the crowd he was designing a campaign to create a crushing defeat and, by October, "no Democrat can say with a straight face they're going to vote for Obama."

"A lot of Republicans have this goofy idea, and a lot in the news media tries to sell us on this goofy idea, that what you really need to do to get independents is move to the center. You have to understand how they define center," Gingrich said. “The center is 50. I like picking fights where I'm at 80 percent. That means even after Obama spends his billion dollars and lies about it we'll still be at 65%. I don't think we'll get 65%. I think 60 would be a more than admirable goal for next year, and that will be enough to win a crushing election."

Speaking to reporters in front of his new field office, Gingrich was asked about his recent criticism of Romney's conservative credentials, though he has vowed to keep his attacks focused on Obama.

"Look, I'm not going out of my way to argue with anybody, but I was asked the question," he said listing his conservative record. " ... When you were very proudly a Reagan supporter in 1979 and 1980 and for all eight years of the Reagan administration, there's a contrast. And I expect Romney will draw contrast with me. As long as it is factually accurate and as long as it is done in a way that's issue-oriented I think that's part of the process. I tend to spend 95 percent of my time either talking about a positive solution or talking about President Obama. My primary opponent is President Obama."