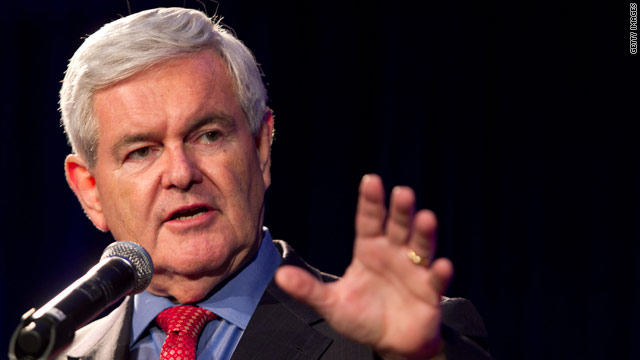 Gingrich did not mention any rivals by name when he addressed the issue at a Charleston town hall, but Minnesota Congresswoman Michele Bachmann has become the former House Speaker's most vocal critic ever since he argued at last week's CNN debate that the GOP should take a "humane" position on illegal immigrants who are well-assimilated into society and should be considered for legal status.

"Several of my friends have said I'm for amnesty, that's not true. At least one of them is going around saying I want to have amnesty for 11 million people, that's just totally false. That's in fact an Obama-level, Obama-quality statement," said Gingrich Monday evening.

Gingrich was vague when he characterized how many illegal immigrants might benefit from creating a path to earned legality, telling approximately 600 people at the College of Charleston's Sottile Theater, "I think the number that would affect is relatively small but it's not non-existent."

Gingrich's website describes "a path to legality, but not citizenship" for "some of the millions of people who are here outside the law" but are law-abiding, tax-paying individuals with deep ties to America. Relatively small, perhaps, when comparing millions to the total sum of an estimated 8-12 million people living in the United States who entered illegally.

The rising Republican presidential candidate appealed to strong anti-illegal immigration sentiments in the state by criticizing the Obama administration for suing South Carolina, Alabama and Arizona for enacting legislation allowing local authorities to crack down on undocumented immigrants.

Earlier Monday, Gingrich met with South Carolina state Sen. Larry Grooms about South Carolina's new immigration law and slammed President Obama at the town hall for allowing 16 foreign countries to be part of a Department of Justice lawsuit against the Palmetto State.

"I would side with South Carolina," said Gingrich. "The president of the United States in that many different places can't figure out what side he's on? It makes you wonder which country he thinks he's president of."

Republican Congressman Tim Scott, a tea party favorite who hosted the town hall-style event with Gingrich, told CNN's John King he doesn't agree with Gingrich's position on a path to legality but said voters in the state weren't looking for "the perfect candidate."

Gingrich is making an aggressive push in South Carolina by building the largest campaign operation to date with nine paid staffers. He is also picking up a considerable amount of tea party support that may help him become the conservative alternative to former Massachusetts Gov. Mitt Romney.

Gene Bertoluzzi of Summerville attended Monday night's town hall and said he is volunteering for the Gingrich campaign along with his wife, Dana, but he wants to wait and see if Gingrich can hold onto his frontrunner status.

"My problem is that everybody that's been a frontrunner has fallen off the fence after they get up, so lets' see how long he can do this without falling off," he said.

Gingrich is on a three-day campaign swing through South Carolina, the first southern state to vote in the primary and caucus calendar, holding a number of meetings, fundraisers and events. Tuesday he'll open his Beaufort Country field office in Bluffton and hold a town hall meeting there and in Newberry. He'll hold another town hall meeting Wednesday morning at Tommy's Ham House in Greenville.