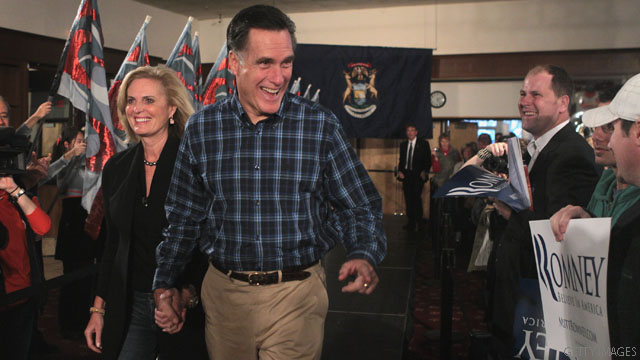 Tampa, Florida (CNN) - You've heard of the Dos Equis beer pitch-man, "The Most Interesting Man in the World." Perhaps it's time to dub Mitt Romney "The Most Fortunate Candidate in the Race."

The former Massachusetts governor has led what has been a relatively charmed campaign. While Romney has spent the last few weeks polishing his attack lines for the president, several of his rivals have had near implosions. Witness Herman Cain and Rick Perry.

At a fruit processing plant in Miami, Romney charged the president has a fundamental misunderstanding of the economy.

The statement is flatly false. President Obama has had jobs before. But it fits neatly into the Romney playbook. Attack the president. Ignore the GOP field.

"It shows that they are awfully afraid of facing me in the general election. They want to throw the primary process to anybody but me. So, bring it on, we are ready for them," Romney said.

The DNC ad took out of context some of Romney's past comments on health care and abortion. It was a response to last week's Romney campaign ad that basically did the same thing to the president on the issue of the economy.

After an event in Tampa, Romney refused to answer repeated questions from CNN on why his campaign purposefully took the president's words out of context.

"Guys we have press avails or press conferences almost every day and that’s when I answer the questions," Romney told reporters. That's not quite true. At best, Romney fields questions from reporters a few times a week.

The former governor has played it safe for weeks, granting few national TV interviews and holding only brief news conferences with reporters.

He has also maneuvered key members of the Republican establishment behind his candidacy. This week, he secured the endorsement of Rep. Ileana Ros Lehtinen, a prominent leader in Miami's Cuban American community. Last week he received the support of two U.S. Senators, John Thune R-South Dakota and Kelly Ayotte R-New Hampshire.

On a day when Cain's staff said the conservative businessman was reassessing his campaign after accusations of marital infidelity, Romney fortified his.

"Can I just say that Mitt Romney is the luckiest man on the planet?" Romney critic and conservative CNN contributor Eric Erickson asked on CNN's "John King USA." "All of these guys just keep imploding. Their campaigns implode. And Romney just holds steady at like 22 to 25 percent," he continued.

Making that luck last is the trick in the final month of campaigning before voting begins in Iowa and New Hampshire. Romney still has to hold back his latest surging rival, Newt Gingrich.

A new poll released by the American Research Group in South Carolina shows Gingrich with a commanding lead, well ahead of Romney and the fading Cain.

In an interview with a talk radio host in South Carolina Monday, Gingrich suggested Romney is not a reliable conservative.

"I wouldn't switch my positions for political reason," Gingrich said in a reference to Romney's past shifts on key issues.

When asked about Gingrich's comments Tuesday, Romney ducked into his SUV, back below the radar.

A Cain exit from the race could cut two ways for Romney. Support could drift to such rivals as Gingrich and Perry. But it could send a message to Republicans to end the GOP reality show and get behind a contender who has a decent shot of beating the president.