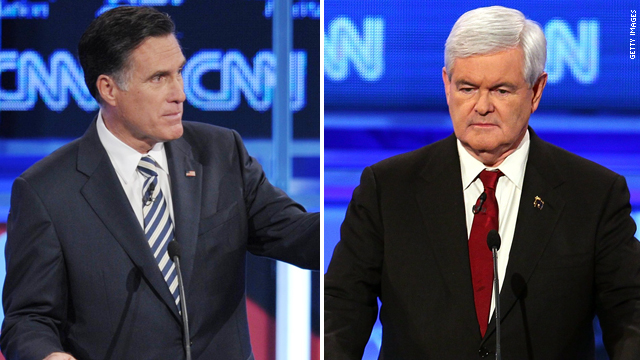 "He's a lifelong politician," Romney said, talking about the former House Speaker. "I think you have to have the credibility of understanding how the economy works. And I do."

The mounting tension follows a recent shift in the GOP presidential race, pitting the two candidates in a heated competition for the top spot in national polls.

"I think to get President Obama out of office, you're going to have to bring something to the race that's different than what he brings," Romney said in an interview with Fox News.

His comments follow a day that marked a new line of attack for Gingrich, who until now had been calling on the GOP presidential field to focus their strikes on Obama instead of each other.

But on Monday, Gingrich called himself "a lot more conservative" than Romney, adding later in an interview with CNN that recent Democratic attacks against the former governor as a flip-flopper were "legitimate."

The two candidates also sparred in the media last week over immigration. Romney insisted Gingrich was an advocate for "amnesty" because he favors a path to legal status for longtime illegal immigrants now well-assimilated into society.

While Gingrich has repeatedly said he only supports legal status and not citizenship, Romney again lobbed the "amnesty" line at his opponent on Monday.

"If he does what I believe he said he was going to do - allow those people to become citizens - that's providing for them a form of amnesty," Romney said.