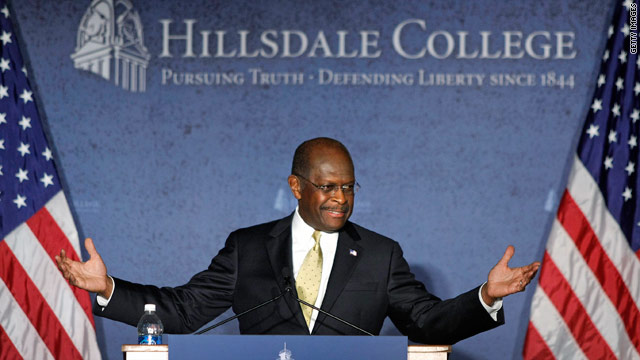 Washington (CNN) – While Herman Cain assesses whether he will stay in the race for the Republican presidential nomination, his campaign Wednesday announced it is going on the air in Iowa with a new ad beginning Friday.

The commercial, the campaign’s second of the season in Iowa, seeks to emphasize Cain’s business background–credentials often touted on the campaign trail qualifications to be president.

“I have spent a lifetime creating jobs, and if you make me America’s CEO, we the people will take this country back,” Cain says to the camera in the ad.

Cain narrates the commercial that shows him first in a factory filled with people.

"The engine of economic growth is the business sector,” he says.

The spot then shows Cain in an empty factory. He addresses the camera directly, saying “Our $15 trillion national debt is killing our children’s future, and it is not going to get any better until we put an executive into the executive office.”

Steve Grubbs, Iowa chairman for the Cain campaign, tells CNN so far its national headquarters has approved spending $80,000 on cable for the ad in the month of December.

The ad could be evidence the Cain effort in Iowa is proceeding as if the campaign will continue, although its fate is far from certain. CNN has learned Cain is expected to spend a considerable amount of time in the first-in-the-nation caucus state in December although plans are still fluid. He will also be there for the next debate of contenders on Dec. 10th.

“Hopefully more than 10 days between now and the caucuses,” Grubbs tells CNN.

How much Cain will be able to spend on paid media and other initiatives in the early voting states, which require a lot of resources to organize, will depend on the campaign’s fundraising efforts.

In an interview Wednesday on Fox News, Cain said contributions went down on the first day after the allegations broke that he had an extramarital affair, which he denies. Cain said those donations have “started to move up.”

And Cain released a Web ad Tuesday, amid back and forth on what “reassessing” his campaign means and the verdict given to CNN: that he would make a decision about his future as a presidential candidate in the “next several days.”

“We cannot make any nation our friend, but we can make them respect us,” Cain told the crowd. “That is the objective.”

In a two-pronged ad defensive, Cain covered national security, his plan for the economy and stimulating job growth over the web and airwaves-an investment seemingly atypical of a dying campaign. But then, Cain hasn’t run a typical campaign so far.