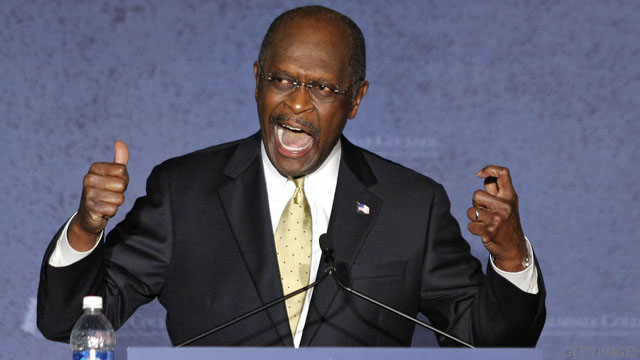 (CNN) – Embattled Republican presidential candidate Herman Cain suffers from lower support among Republican women than Republican men, a problem that predates the allegations of sexual harassment and an extramarital affair, according to recent polls.

Results from the CNN/ORC International Polls taken before Monday's accusation that he engaged in a 14-year affair with an Atlanta businesswoman, suggest his lower standing among Republican women is due to concerns over his economic policies as well as his personal qualities.

His favorable and unfavorable ratings remained largely consistent during the same period of time with men and women, even after the charges. However, GOP women were less likely than GOP men to say Cain's views closely mirror their own on issues, including his "9-9-9" tax plan.

Cain's biggest problem in the surveys was a steep drop in the number of the Republicans who said he was the best candidate to spur economic growth.

"Looking at these numbers, you can make a strong counterargument that the reason why Cain dipped in the polls was that men grew disenchanted with Cain's economic policy," CNN Polling Director Keating Holland said.

In October, 40% of GOP men said Cain was the White House hopeful most likely to get the economy moving again, compared with the 25% of GOP women. But the November figures showed a drop among men to 23% and among women to 16%.

Cain's personal appeal resonated more with GOP men than GOP women, according to the CNN polls released in the last month, with Republican women less likely to think Cain has the right personality and leadership qualities to be president.

"That may be a reflection of the harassment charges, but I think there is a lot more to it than that," Holland said of Cain's approval with women. "Historically, men tend to respond more positively to 'red meat' candidates like Cain than women do."

"Whatever the reason for the gender gap on this question, the latest news is unlikely to help Cain with women," Holland added.