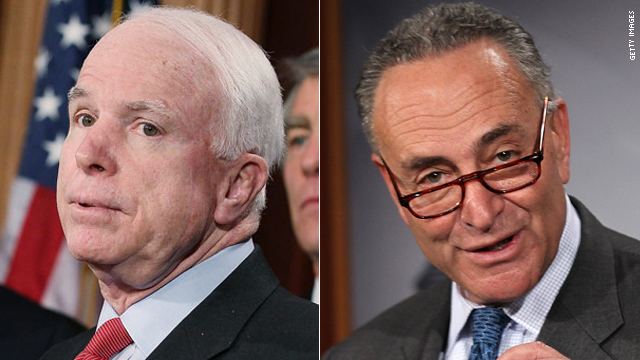 "Isn't it true that Justice (Sandra Day) O'Connor was specifically referring to a person who was captured on Long Island? Last I checked, Long Island was part – albeit sometimes regrettably – part of the United States of America," McCain said on the Senate floor Wednesday.

He made the joke while discussing a Supreme Court case during a Senate debate about detainee policies.

But to one (rather influential) New Yorker, McCain's snark about the island, home to more than 3 million people, wasn't that funny.

Sen. Schumer quickly fired off on Twitter: "All of America saw how heroic Long Islanders were on 9/11. #LongIsland deserves an apology."

About 50 minutes later, a reluctant McCain returned to the Senate floor and took the microphone.

"In an exchange I had on the floor I mentioned that the wonderful people and the wonderful Long Island, I made a joke," McCain said. "I'm sorry that there's at least one of my colleagues that can't take a joke, and so I apologize if I offended him and hope that someday he will have a sense of humor."

The apology, however, didn't seem to do the trick for Schumer, who again took his disappointment to Twitter.

"NYers can take a joke. But if @SenJohnMcCain wants to mock parts of America, stick to Arizona," he wrote.