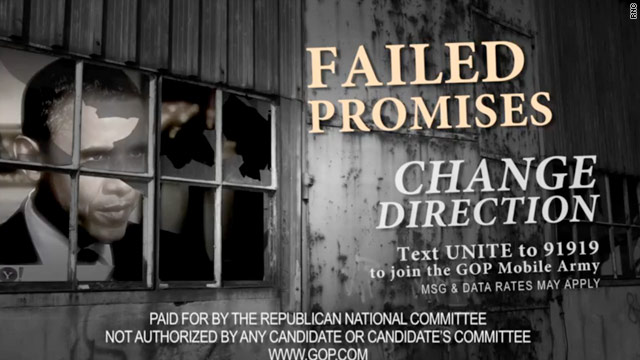 (CNN) - Republicans eager to knock President Barack Obama's record on the economy pounced on his trip to Scranton, Pennsylvania, Wednesday, using it as an opportunity to highlight the dire economic condition in the region.

The Republican National Committee released a 30-second web video, called "Failed Promises: Scranton" ahead of the trip, using clips of Obama speaking previously in Scranton alongside text spelling out grim economic realities that persist in the city.

Speaking in March 2008, then presidential candidate Obama is shown saying: "Here in Pennsylvania, like the rest of the country, there's a lot of economic hardship and a lot of economic anxiety. People are at risk of losing their home or they've seen their home values drop."

Those remarks were made to a local television station during a campaign swing through the Keystone state during Obama's primary battle with then Sen. Hillary Clinton, who battled Obama for the Democratic presidential nomination.

On-screen text makes clear that, at least by the numbers, the situation in Pennsylvania hasn't improved in the years since that trip. Citing figures from the Bureau of Labor Statistics, the RNC displays the unemployment rate climbing by 19% and 37,900 manufacturing jobs lost.

"Three years ago, even fellow Democrats said Barack Obama wasn't ready to be president and that his campaign practiced 'gutter politics.' With over half a million Pennsylvanians out of a job today, President Obama and his allies still seem more interested in launching negative campaign attacks against Mitt Romney than getting the country back to work," Ryan Williams, a Romney campaign spokesman, said in the release.

Obama's trip Wednesday is his seventeenth trip to Pennsylvania since taking office. Obama won the state by a ten-point margin in 2008, but the state is seen as largely in play in the 2012 contest.

A Franklin and Marshall College poll taken in early November indicated Obama ahead of potential Republican rivals in Pennsylvania in hypothethtical 2012 general election showdowns. The closest match-up was between Obama and Romney, with Obama leading the former Massachusetts governor 35% to 26%. However, many voters surveyed said they hadn't yet made up their mind about whom to support in the presidential election.