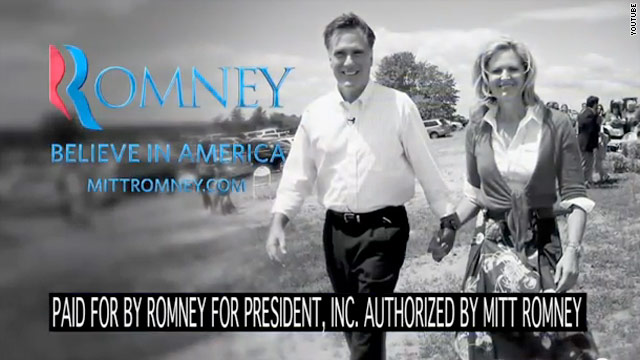 Manchester, New Hampshire (CNN) - Mitt Romney is releasing a second ad in New Hampshire, and it's likely to be less controversial than his first.

The television spot features Romney speaking at a CNN debate about his business credentials and his plan to cut federal spending.

"I spent my life in the private sector," said Romney. "I've competed with companies around the world. I've learned something about how it is that economies grow."

The video is interspersed with black and white photos of Romney on the stump and meeting voters. One photo shows Romney speaking at the rally where he was endorsed by New Hampshire Sen. Kelly Ayotte earlier this month.

In the ad Romney proposes "cutting spending, capping federal spending as a percentage of GDP at 20% or less, and having a balanced budget amendment."

National Journal reported the campaign will spend $85,535 to air the spot New Hampshire news station WMUR, and said it would run Dec. 1-6.

Romney is still answering questions about his first television ad, which outraged Democrats by quoting President Barack Obama out of context.

The advertisement showed Obama campaigning in 2008 saying: "If we keep talking about the economy, we're going to lose."

Romney's campaign has defended the ad.

"Now, the tables have turned - President Obama is doing exactly what candidate Obama criticized," said Romney spokeswoman Andrea Saul. "President Obama and his team don't want to talk about the economy and have tried to distract voters from his abysmal economic record."