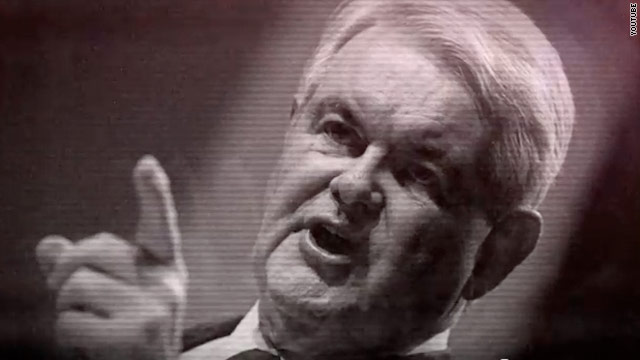 (CNN) - Newt Gingrich can add another Republican presidential foe to the list of those taking aim at his record: Texas Rep. Ron Paul.

The 2 1/2-minute spot features a string of clips from the news media in which journalists and political leaders highlight inconsistencies both in Gingrich's time in office and on the campaign trail.

The ad points at a recent controversy over reports that Gingrich received a paycheck of at least $1.6 million from Freddie Mac while he served as a consultant for the mortgage giant.

The video also includes a 2008 commercial Gingrich did on climate change with former House Speaker Nancy Pelosi, a Democratic political heavyweight regarded with much disdain among conservative Republicans.

Gingrich now says the commercial was one of the "dumbest" things he's done in recent years but defends it as an effort to show that conservatives care about the environment.

Among the montage of clips is a short scene with a Republican voter pointing his finger at Gingrich and saying, "You're an embarrassment to our party."

Paul is the latest presidential candidate to place the bull’s-eye on Gingrich. Both former Massachusetts Gov. Mitt Romney and Minnesota Rep. Michele Bachmann have also blasted him over his immigration policies and long career in Washington.

Their attacks come after Gingrich has surged to the front of the GOP race, where he now faces heated competition with Romney for the top spot. Paul falls behind the two in several polls, including surveys measuring support in Iowa and New Hampshire, states that hold the nation’s first two presidential contests.

The ad ends using Gingrich's own words from a Monday radio interview, in which he leveled heavy charges against Romney as a flip-flopper.

"It's wrong to go around and adopt radically different positions, because then people have to ask themselves, 'What will you tell me next time?" Gingrich can be heard saying as the ad closes.

The video then comes to a standstill with eerie music playing in the background and nothing on the screen but text that reads: "What will you tell us next?"